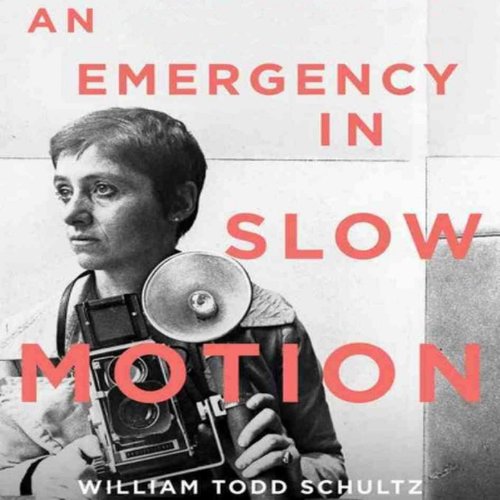 An Emergency in Slow Motion

By: William Todd Schultz
Narrated by: Elizabeth Wiley
Try for £0.00

Diane Arbus was one of the most brilliant and revered photographers in the history of American art. Her portraits, in stark black and white, seemed to reveal the psychological truths of their subjects. But after she committed suicide at the age of 48, the presumed chaos and darkness of her own inner life became, for many viewers, inextricable from her work.

In the spirit of Janet Malcolm's classic examination of Sylvia Plath, The Silent Woman, William Todd Schultz's An Emergency in Slow Motion reveals the creative and personal struggles of Diane Arbus. Schultz, an expert in personality psychology, veers from traditional biography to look at Arbus's life through the prism of five central mysteries: her childhood, her outcast affinity, her sexuality, her time in therapy, and her suicide. He seeks not to give Arbus some definitive diagnosis, but to ponder some of the private motives behind her public works and acts. In this approach, Schultz not only goes deeper into her life than any previous writing, but provides a template to think about the creative life in general.

Schultz's careful analysis is informed, in part, by the recent release of Arbus's writing by her estate, as well as interviews with Arbus's last therapist. An Emergency in Slow Motion combines new revelations and breathtaking insights into a must-listen psychobiography about a monumental artist - the first new look at Arbus in 25 years.

What listeners say about An Emergency in Slow Motion

I feel a little bit like a nun or ageing spinster now. This lady believed in strangely magical thinking translated into all sorts of noseynesses. At least so I'm told. Interesting but don't really listen to this in the company of kids or boring middle aged woman.

Reads like a text book on a sat navigation device!

I like reading about photographers and this is one area where Audible lacks. Their arts section is woeful. However, thought I would try this having read the biography of Diane Arbus by Patricia Boswell some years ago. I regret this is an phycological analysis of the photographer which is read by a female who must also do satellite navigation instructions. It is about 50% about the photographs and the rest is repetitious details of her sex life and suicide. The facts are repeated again and again and in such a monotonous tone..

Has An Emergency in Slow Motion put you off other books in this genre?

No, I love books about art and artists. But they must be fun to read and well narrated.

Who might you have cast as narrator instead of Elizabeth Wiley?

Someone or anyone who does not have a monotonous flat tone.

Retired psychotherapist I appreciated the author’s approach.
Pronouncing her name correctly indicates a respect for the subject.

Although tragic, I felt a beautiful clarity in connection with my own vision. Diane's artistic psychoanalysis was beautifully conveyed and wonderfully presented.

The Title Says It All

Where does An Emergency in Slow Motion rank among all the audiobooks you’ve listened to so far?

I listen to hundreds every year(to give perspective), I would rate this around 100 only because of the reader. . Although I found the subject,herself, to be a rather repulsive figure, the writing is superb with minimal conjectures and salient observations(like the DSM is a collection of rubbish). Considering that my own life, as an adult, was beginning at the time she died, I do understand some of her fascination with the “formerly forbidden” experimental phases in the decade before her death.Suicide seemed like the only possible outcome of such a life on the edge...death on her own terms at her chosen time. She had lost interest in photography and the world.

Helen Boigon because she never knew he patient at all.

The most excellent possible choice of readers, Elizabeth Wiley made this book come alive or I never could have gotten past the first chapter. Just the right phrasing and emphasis.Her voice was authoritative and convincing. It was almost like she had observed Arbus’ life.

No.. although I did feel sorry for this poor woman searching for something that she never found. She seemed to have no spiritual depth. I,personally,don’t find her work exceptional.

Not normally a book I would read, listening to it was more tolerable. It is doubtful I would recommend it to anyone else.