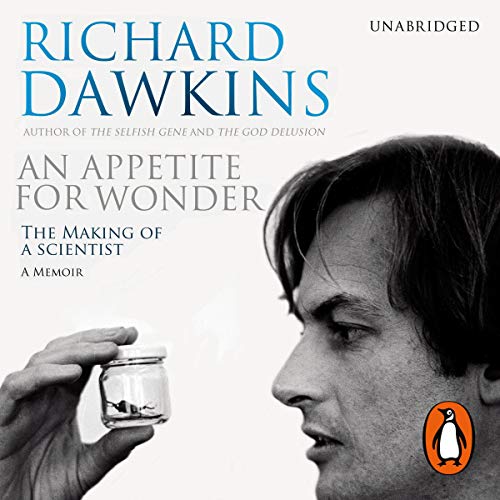 Born to parents who were enthusiastic naturalists, and linked through his wider family to a clutch of accomplished scientists, Richard Dawkins was bound to have biology in his genes. But what were the influences that shaped his life and intellectual development? And who inspired him to become the pioneering scientist and public thinker now famous (and infamous to some) around the world?

In An Appetite for Wonder we join him on a personal journey back to an enchanting childhood in colonial Africa. There the exotic natural world was his constant companion. Boarding school in England at the age of eight, and, later, public school at Oundle introduce Dawkins, and the listener, to strange rules and eccentric schoolmasters, vividly described with both humorous affection and some reservation.

An initial fervent attachment to Church of England religion soon gives way to disaffection and, later, teenage rebellion. Early signs of a preference for music, poetry, and reading over practical matters become apparent as he recalls the opportunities that entered his small world. Oxford, however, is the catalyst to his life. Vigorous debate in the dynamic Zoology Department unleashes his innate intellectual curiosity, and inspirational mentors together with his own creative thinking ignite the spark that results in his radical new vision of Darwinism, The Selfish Gene.

From innocent child to charismatic world-famous scientist, Richard Dawkins paints a colourful, richly textured canvas of his early life. Honest self-reflection and witty anecdotes are interspersed with touching reminiscences of his family and friends, literature, poetry, and songs. We are finally able to understand the private influences that shaped the public man who, more than anyone else in his generation, explained our own origins.

What listeners say about An Appetite for Wonder

Sorry I am Biased

Don't look to me for an unbiased review. This man was key to my freedom from religious shackles. I loved his humble portrayal of English life in this book. The view into life at the sunset of the British Empire. The glimpse of University life. I understand why he is so fed up with the uneducated and narrow minded vandalising progress in science. Spraying graffiti on the trains of knowledge. Thank you Mr Dawkins.

Not quite what I expected.

I like a lot of what Richard Dawkins has done, and this is certainly well written, but it seemed to focus a little too much on his research in the field of genetics and not really give as much insight into his life as I`d thought it would have done. I still think he`s a great writer and communicator of ideas though.

Richard Dawkins biography but only half the story

It was interesting to hear Richard Dawkin's life story. Although I would stress this is his early life only, something I wasn't aware of when I listened and hence the ending came rather unexpectedly early for me. He is still on wife number 1 in this book. Thankfully his current wife, Lalla Ward, makes only a tiny contribution to narrating this book as I find her profoundly irritating to listen to.

It was a good read, I would recommend. Nice to have it narrated by Dawkins as always.

A book of 2 halves

A great start and fascinating childhood, it had my dreaming of Africa. However, far to much intricate detail on work projects with little insight in to the personal R.D.

Dawkins tells his own story in his own witty, biting way. Loved the detail of his pioneering academic contributions, which took me several listens to get my head around. Plenty of colourful detail makes this book a rich treat of wonders, with Dawkins' characteristic marshalling of language employed to sensational effect. He is barely conscious of his own privilege in life and the perspective in the book is very clearly from that of one who has never really had his own power and place in society troubled by oppression or isolation. For example, he pays lip service to an aspect of feminism for the sake of making a point, but clearly relates to it an a rather awkward and distanced way.

Would you consider the audio edition of An Appetite for Wonder to be better than the print version?

Yes I would because I can't see well and would never be able to get through text version.

What was one of the most memorable moments of An Appetite for Wonder?

Recollections about life in Africa.

Have you listened to any of Richard Dawkins and Lalla Ward ’s other performances before? How does this one compare?

I have and I always enjoy their performances

This book was great! Looking forward to part 2