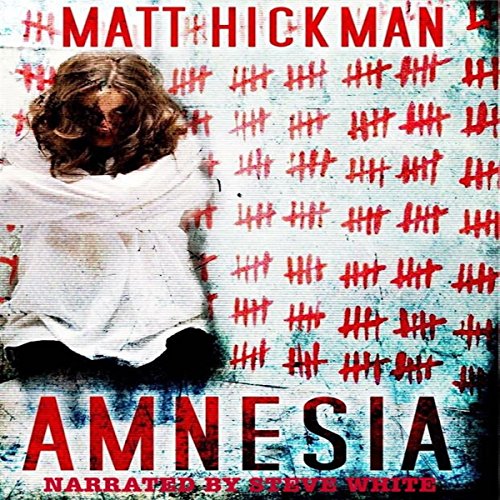 By: Matt Hickman
Narrated by: Steve White
Try for £0.00

Six strangers: three men, three women, awake in a sterile medical facility. Apart from two of the group, their minds totally blank as to how they arrived there, or the purpose of their detainment. Locks have been secured on each of the doors and iron bars on the window - no way to escape. Surveillance cameras on the walls indicate that they are being studied.

When they stumble across some official paperwork by a company, The Hampton Group, headed up by a mysterious doctor, it begins to transpire that the group were volunteers in a medical trial. The trial for a revolutionary new drug that can abate the development of cancer cells. As time goes by, a few of the subjects begin to show some signs of erratic behavior. Is it a side effect of the medical trial, or something much more sinister?

What listeners say about Amnesia

"Maxwell, we may have a problem.

Responding to an advertisement to participate in a medical trial in exchange for £5,000, a man and a woman, with four others, wake up in pristine laboratory surroundings. At first uncomfortable, the six begin to settle in but a power failure ignites real problems. This story by Matt Hickman builds well, hinting at troubles to come. The book is short - only four and one half hours - so the characters are only superficially drawn, but enough for the purpose of the story.

The vast paced later action is matched by the brisk speech of English accented narrator, Steve White.
His deepish voice is a good match for the subject matter, and his reading is well articulated, too, He gives good, distinctive individual voicings for the characters, but, somehow, fails to generate a sense of suspense and some of his pronunciations are suspect, such as 'buttcher' (as in butter) for butcher, 'garbles' instead of gables, and 'arhpex' rather than apex. These, and others, together with a repeated phrase not edited out, damaged the quality of his performance.

My thanks to the rights holder of Amnesia, who, at my request freely gifted me with a complimentary copy via a download code. As previously mentioned, the book was not overly long, just right to this horror story, with a touch of mystery, suspicion, gore and action and a satisfying conclusion. A good book for any fright fans

A Dark and Gothic Tale

Six people awake in a medical ward with no memory of how they got rhere, and are disturbed to find themselves part of a medical test! I enjoyed this book it was a dark, gothic story of the horrors of medical testing and the subjects lack of control once they were locked in. Throw in a storm and you have all the ingredients for a sinister and twisted horror story, it gave me the old 'Hammer House of Horror' vibes, very creepy!

The narrator is wonderful though took a little while to warm to his voice. The writing is quite addictive. I love the slow build up of the story. But I had to stop around 3/4s the way through. Once the power storm hit and things went crazy this creepy and mysterious story descended into something very sinister. If you love old school horror with lashings of gratuitous violence you wont be disappointed.

Good twisted suspense thriller. Our first character we're introduced to is having a bit of bad financial luck in her life after losing her job and coming up short on rent. She sees an add for a medical drug trial. Our second character is also having financial difficulties, separated from his wife and son and in significant debt due to his gambling addiction. He also comes across the offer to participate in a clinical drug trial. The experimental medical drug trial study is supposedly a new breakthrough cure for cancer. Six people in all awaken in a medical facility unaware of how they arrived there. Only our first two characters have reliable memories of events before awakening in this strange place. The other subjects of the experimental drug trial, there's more to them than we first perceive. And the drug is not actually as presented. The drug trial study goes horribly wrong and all hell breaks loose. I personally wouldn't mind seeing this story turned into a movie.
"I received this free promotional review copy audiobook and have voluntarily left this review."

This is a very well written tale. The narrator does an awesome job! The twist at the end was unexpected and also great.

Amnesia is a horrific book that is scary and very descriptive. The book has to do with betrayal, lies, murder and experimentation. The twist and turns kept me on this rollercoaster ride of this twisted horror tale. I received this audio book at my request and I am leaving an honest review of my own volition.

I really liked this book. The narrator was awesome! I think was a little slow at the beginning but absolutely got a lot better!!

What disappointed you about Amnesia?

The violence was just horrible and sick! There should be a warning in the synopsis about how much sick violence was involved. I fast forwarded through most of the last half of the booki.

What was most disappointing about Matt Hickman’s story?

The premise was interesting, however, I could not enjoy it because I don't like violence and I had a hard time understanding the narrator.

His accent (Australian?) was so pronounced that I had a difficult time understanding him, especially when he read some of the character's voices in such a heavy brogue.

I wish I had not listened to this book. The disgusting scenes stuck in my head for several days. Ugh!!!