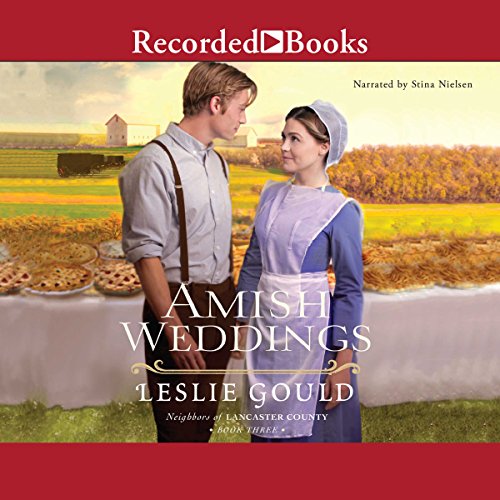 By: Leslie Gould
Narrated by: Stina Nielsen
Try for £0.00

Gregarious Rose Lehman, who's always the life of the Amish youth singings, is determined to marry the bishop's son, Reuben Byler - until the handsome Army buddy of her future brother-in-law shows up in Lancaster County. In comparison to Trevor, Reuben seems downright boring. Trevor shares Rose's sense of fun and adventure, and her easygoing disposition. When her sister Lila's buggy is rear-ended and Lila is horribly injured, Rose finds herself with more freedom than she's ever experienced. Everyone is so concerned about Lila that no one realizes Rose is sneaking out with Trevor. Except for Reuben. But in his usual passive way, he doesn't confront her, nor does he address the situation with her Dat or anyone else in the district. Rose appreciates Reuben's discretion, but she also resents it. Part of her relishes the freedom she's found with Trevor, but the other part of her wishes Reuben would "fight" for her, as much as any Amish man would. Too late, she realizes the foolish choice she's made. Has she ruined her best chance at love, or is there another path to happiness she just hasn't seen yet?

What listeners say about Amish Weddings

I had really enjoyed the rest of the books of Leslie Gould but this one wasn't as pure and clean so I couldn't listen any longer.
Too bad people cant just tell stories without sensual undertones. It's so tiring.

I enjoyed listening to a wonderful story. I like stories about the Amish. They arre good people.

This is a beautiful story well worth your time

I really enjoyed reading this story. While reading it, I was reminded that our lives as well, or like tapestries unfolding. According to the book of Romans, it is written, all things work together for the good for those that love God and are called according to his purpose. This story portrays that very scripture. It is beautiful.

I loved the conclusion of this series! I was sad that it came to an end! Watching the characters grow into wonderful people! The stories all came together ❤️. I loved how the Amish and Englishers blended ! Look firwRd to reading more of Leslie’s books

Wonderful Ending to an Amazing Series

I am very impressed with this author. She is able to create Great suspense, and weave unity and God’s wisdom into her stories for an effect I don’t remember experiencing before this series in such a powerful way. She has been added to my Favorite Author List for sure. Definite talent here. Be sure to read the series in order.

i loved this series!! so entertaining and delightful! i wish there were more books in the series.

Very engaging and kept me wanting to listen on. Characters become like part of your circle of friends.