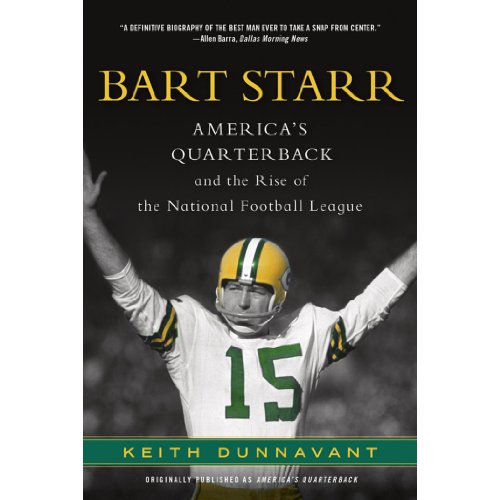 By: Keith Dunnavant
Narrated by: Jay Snyder
Try for £0.00

A powerful biography of one of the greatest football players of all time, in the spirit of Johnny U and Namath.

No one can touch Bart Starr's record setting 5 NFL Championships, including 3 straight. America's Quarterback tells the story of the man who helped create the legend of Vince Lombardi and the Green Bay Packers. Set against the changing landscape of the last half of the 20th century, this biography traces Starr’s life from childhood in Alabama to stardom in Green Bay and beyond. Not a simple sports story, Dunnavant traces the story of one man reaching for the American dream while professional football emerged from the shadows to capture the nation’s imagination.

It’s a story of the tension between a coach and a player as different as fire and ice, and how they came to trust and revere each other. It’s a story of triumph tempered by tragedy, and the world-class athlete who quietly and persistently, achieved a level of greatness unsurpassed by any quarterback since.

A remarkable blend of personal memory and historical narrative, America’s Quarterback is a tribute to an American hero and the perfect companion to the classic When Pride Still Mattered.

What listeners say about America's Quarterback

What a great leader

can't say enough on what a great guy Bart Start was and a great leader.

Not just a football book. A great book about dedication and choosing the right things to do in life.