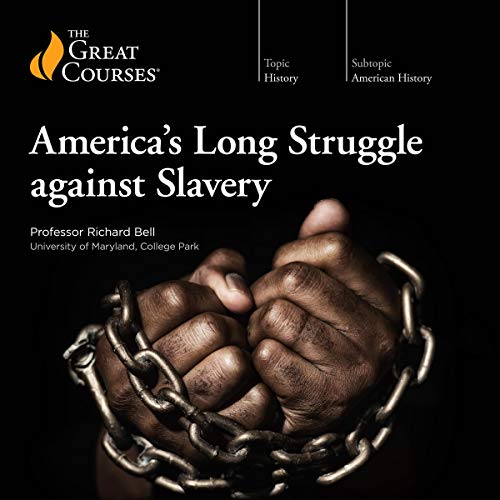 What do you really know about the fight against slavery in America? We’re all familiar with the Underground Railroad and the Emancipation Proclamation, but the fight against slavery was not some sudden movement that sprang up in the middle of the 19th century. Resistance from the enslaved started on the western coast of Africa in the 15th century and continued as the institution of slavery was codified in America, culminating with the War between the States.

This 300-year struggle has too often been glossed over by history books enamored with American ingenuity, Manifest Destiny, and tales of Revolutionary freedom. But to understand America - to fully understand our country today - one must examine the whole history of struggle, oppression, and resistance, not only by famous figures like Abraham Lincoln and Harriet Tubman, but also by an enormous and often unfamiliar cast of characters, including:

America’s Long Struggle Against Slavery is your chance to survey the history of the American anti-slavery movement, from the dawn of the transatlantic slave trade during the late 15th century to the end of Reconstruction in 1877 and beyond. Taught by Professor Richard Bell of the University of Maryland, these 30 eye-opening lectures give you an up-close view of a venal institution and the people who fought against it - and who often paid for their courage with their lives.

This Great Course is a must-have for scholars and history buffs alike. As Professor Bell examines the different means and methods that Americans, white and black, have used to escape slavery, he presents the grand problems that animated everyone engaged in this great struggle.

What listeners say about America’s Long Struggle Against Slavery

This is without doubt one of the best recitals of slavery ever. A fantastic if harrowing portrayal of this subject!

Narrator very good, a very educational book, America has not moved on a whole lot in terms of that racist mentality

Insightful, thought provoking, balanced and well structured. This course taught me things I did not read about in school or uni. Excellent narration, that really emphasises key dramatic events and attitudes of the time.

He covers many facts about slavery, but fails to articulate the other significant historical issues that were concurrently happening and shows his lack of understanding about capitalism stating that somehow the principles of supply and demand and rights to exchange private property in pursuit of profit caused racism. Free market economies work, but slavery is not a free market. Slavery immorrally took away human rights and treated people as property. Capitalism as a market principle had nothing to do with it, it was evil people who would make laws to deprive people of their rights that was the crime. A communist dictator who who decides to racially discriminate who would be just as evil. He looks into 20th century and seem content with his univarient analysis of the war on drugs, but glosses over horrible racism of the democratic party and the KKK. It is still a worthy listen however.

This course provides an excellent overview and the essential timeline that details slavery's origins in America, the perverse addiction to and dependence on it through the civil war, and the aftermath that we are still struggling with as a nation. A devastating, enlightening overview that provides proper context with chilling details that drop us down into the horrifying realities for the enslaved and the moral corruption of their masters and the political system that protected them, with arrows pointing in the direction of further exploration. Highly recommend.

I thoroughly enjoyed this course and now know why life in this country has been such a struggle. I'm now empathetic towards those who do not understand or who chooses to not acknowledge this great sin. I fear for the future of this country and the world if reconciliation doesn't happen soon.

I absolutely loved this book. The author is extremely detailed and informative and gives an unbiased account of the Transatlantic Slave trade. I now feel truly informed on why things the way they are as the author gave a clear depiction of cause and effect pertaining Slavery relative to Modern American. This lecture should be mandatory curriculum for higschool students in this country. Bravo Richard Bell!! Bravo!!!

Wow, a must for everyone.

This was simply excellent and challenging without comparison. I think everyone should listen to this course to understand what race slavery is and was, and the forms of slavery we still encounter.

By Far the Best Great Course in my Collection

I've been waiting for years for Great Courses to include African American history and this offering was worth the wait! Bell is one of the leading scholars in the field and his delivery is as good as the content of each lecture. I hope he comes on board to offer more topics or more on this one.

Tragic, sad, and eye opening, this course does a great job detailing how engrained slavery was to our current world and most of all the United States. It is historical, it is factual and hard hitting. I highly recommend this course for all of those who want to broaden their horizons and get an unvarnished view of American history.

Wonderfully narrated yet concise. Richard Bell keeps the focus on Black heroes. The lecture series also includes info on the repercussions and modern manifestations of slavery. Anyone who wants a detailed primer or a review of this topic should definitely listen.