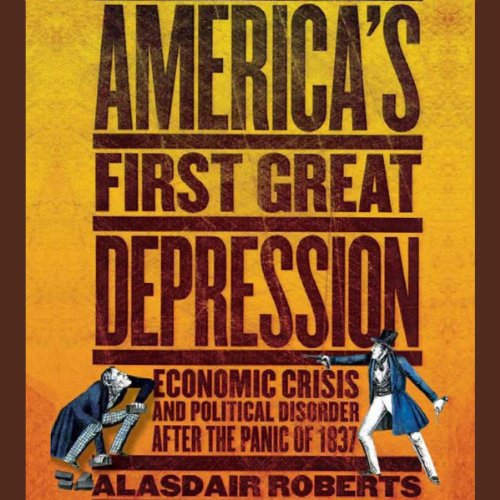 By: Alasdair Roberts
Narrated by: Kevin Young
Try for £0.00

For a while, it seemed impossible to lose money on real estate. But then the bubble burst. The financial sector was paralyzed and the economy contracted. State and federal governments struggled to pay their domestic and foreign creditors. Washington was incapable of decisive action. The country seethed with political and social unrest. In America's First Great Depression, Alasdair Roberts describes how the United States dealt with the economic and political crisis that followed the Panic of 1837.

As Roberts shows, the two decades that preceded the Panic had marked a democratic surge in the United States. However, the nation's commitment to democracy was tested severely during this crisis. Foreign lenders questioned whether American politicians could make the unpopular decisions needed on spending and taxing. State and local officials struggled to put down riots and rebellion. A few wondered whether this was the end of America's democratic experiment.

Roberts explains how the country's woes were complicated by its dependence on foreign trade and investment, particularly with Britain. Aware of the contemporary relevance of this story, Roberts examines how the country responded to the political and cultural aftershocks of 1837, transforming its political institutions to strike a new balance between liberty and social order, and uneasily coming to terms with its place in the global economy.

“This timely book will be of great use not just to students of economic history but also to readers who wish to find historical precedent for today's uncertain, turbulent times." ( Library Journal)
" America's First Great Depression is astute, compelling, concise, original, relevant, transatlantic, well-written, and witty." (Robert E. Wright, Augustana College, author of One Nation Under Debt and Fubarnomics)
“If you want to complete your education, America's First Great Depression is a good place to begin." (Richard Sylla, New York University, coauthor of A History of Interest Rates)

Very enjoyable book. The author does an excellent job of bringing together multiple threads of events that contributed to the 1837 depression in a way that tells a coherent story. The author also includes the necessary background information for the reader to place the events in an understandable context. Not really a narrative history, but a very strong analytic history of the event that doesn't sacrifice readability. The author often takes short sidetracks to add color and interest to the main story, but in a way that doesn't break the flow of the main story.

Excellent companion to read along with "Andrew Jackson: His Life and Times" by H.W. Brands. Another book that goes well with this is "Alexander Hamilton" by Ron Chernow which provides a great background to the Bank of the United States and the tension between the Jeffersonian and Hamiltonian visions of the United States.

I have to admit I was looking for a social history, focusing on how people responded to the depression, and this wasn't it. However, it is an interesting look at this turning point in American history. Robert's persuasively argues that this economic crisis pushed Americans to reconceive the role of state governments and their assumptions about economic growth. Most interestingly, Roberts demonstrates the complicated interrelationships between American popular belief in their destiny to expand across the continent, the military and diplomatic aspects of this expansion, and the reality that antebellum America economically depended on British investments, banks, and customers. Politicians might be guided by popular enthusiasm but they also had to contend with economic realities that might contradict the will of the people.