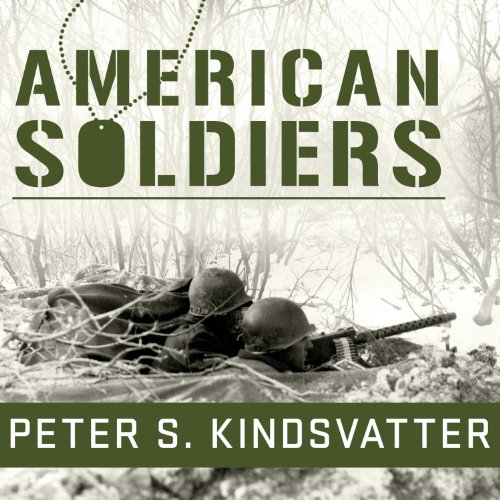 By: Peter S. Kindsvatter
Narrated by: Joshua Swanson
Try for £0.00

Some warriors are drawn to the thrill of combat and find it the defining moment of their lives. Others fall victim to fear, exhaustion, impaired reasoning, and despair. This was certainly true for 20th-century American ground troops. Whether embracing or being demoralized by war, these men risked their lives for causes larger than themselves with no promise of safe return.

Focusing on both soldiers and marines, Peter S. Kindsvatter draws on histories and memoirs, oral histories, psychological and sociological studies, and even fiction to show that their experiences remain fundamentally the same, regardless of the enemy, terrain, training, or weaponry.

Kindsvatter gets inside the minds of American soldiers to reveal what motivated them to serve and how they were turned into soldiers. He re-creates the physical and emotional aspects of war to tell how fighting men dealt with danger and hardship, and he explores the roles of comradeship, leadership, and the sustaining beliefs in cause and country. And he tells why some broke down under fire while others excelled.

Here are the first tastes of battle, as when a green recruit reported that "for the first time I realized that the people over the ridge wanted to kill me," while another was befuddled by the unfamiliar sound of bullets whizzing overhead. Here are soldiers struggling to cope with war's stress by seeking solace from local women or simply smoking cigarettes. And here are tales of combat avoidance and fraggings not unique to Vietnam, of soldiers in Korea disgruntled over home-front indifference, and of the unique experiences of African American soldiers in the Jim Crow Army. By capturing the core "band of brothers" experience across several generations of warfare, Kindsvatter celebrates the American soldier while helping us to better understand war's lethal reality - and why soldiers persevere.

What listeners say about American Soldiers

I found it interesting looking back and comparing soldiers from different wars and how they were viewed and how they viewed the war they were in. I am a Viet Nam Veteran agreed with alot of what was said there was alot of truth with how war was viewed. I would recommend it to anyone who is a history nut. It was interesting.

The content is excellent, a lot of worthwhile information especially for military leaders. However, it's clear that the narrator has never served in the military and nobody on the recording staff had either the knowledge or inclination to correct him.