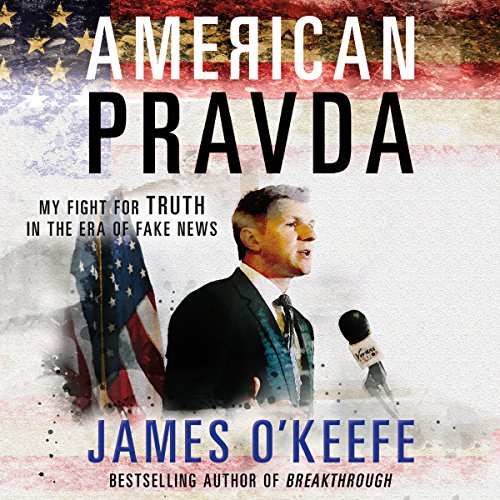 The one real difference between the American press and the Soviet state newspaper Pravda was that the Russian people knew they were being lied to. To expose the lies our media tell us today, controversial journalist James O'Keefe created Project Veritas, an independent news organization whose reporters go where traditional journalists dare not. Their investigative work - equal parts James Bond, Mike Wallace, and Saul Alinsky - has had a consistent and powerful impact on its targets.

In American Pravda, the listener is invited to go undercover with these intrepid journalists as they infiltrate political campaigns, unmask dishonest officials, and expose voter fraud. A rollicking adventure story on one level, this audiobook also serves as a treatise on modern media, arguing that establishment journalists have a vested interest in keeping the powerful comfortable and the people misinformed.

This audiobook not only contests the false narratives frequently put forth by corporate media; it documents the consequences of telling the truth in a world that does not necessarily want to hear it. O'Keefe's enemies attack with lawsuits, smear campaigns, political prosecutions, and false charges in an effort to shut down Project Veritas. For O'Keefe every one of these attacks is a sign of success. American Pravda puts the myths and misconceptions surrounding O'Keefe's activities to rest and will make you rethink every word you hear in the so-called mainstream press.

What listeners say about American Pravda

The fascinating story of James O'Keefe and his undercover journalism operation that tells like a spy thriller, weaving multiple threads together as an operation grows from a brief encounter to a viral internet sensation that can result in all manner of real world consequences.

O'Keefe documents his battles against the corrupt and powerful, and fulfills a role that is vital for maintaining a healthy society free from corruption.

Gangsters beware, Veritas is everywhere. Food for thought for would be schemers.

Bonus: O'Keefe's impressions of those who he quotes, varied and amusing. Excellent range sir!