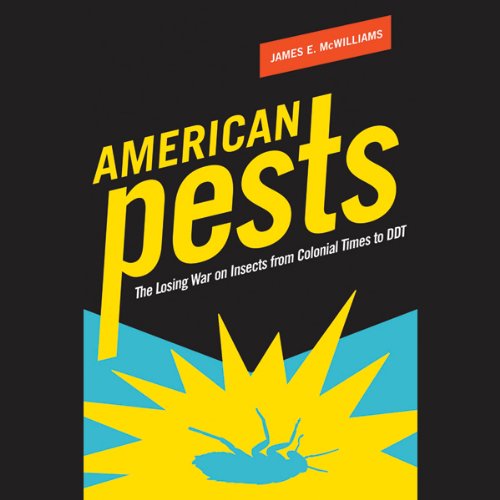 Environmental Hazards in Daily Life and the Science of Epidemiology
By: James E. McWilliams
Narrated by: David Zinn
Length: 8 hrs and 8 mins
Categories: Non-fiction, Environment
3 out of 5 stars 3.0 (1 rating)

Inspired by the still-revolutionary theories of Rachel Carson's Silent Spring, James E. McWilliams argues for a more harmonious and rational approach to our relationship with insects, one that does not harm our environment and, consequently, ourselves along the way.

Beginning with the early techniques of colonial farmers and ending with the modern use of chemical insecticides, McWilliams deftly shows how America's war on insects mirrors its continual struggle with nature, economic development, technology, and federal regulation. He reveals a very American paradox: the men and women who settled and developed this country sought to control the environment and achieve certain economic goals; yet their methods of agricultural expansion undermined their efforts and linked them even closer to the inexorable realities of the insect world.

"[A] colorful chronicle of pest management in the United States... As well written as it is thorough." (Publishers Weekly)
"[McWilliams'] book should resonate in these times of GM temptations and global food shortages." (Times Literary Supplement)
"[McWilliams] knows how to address unusual historical topics in rich detail... Poignant... Thorough... Recommended." (Library Journal)

It's easier to incite than educate.

The narrator is dryer than week old toast. The book itself is dangerous. Peppering flawed arguments with bits of truth which will lead the weak minded and gullible to assert they've been poisoned by the Judas Goat of industry, i.e. the pest control technician. Integrated Pest Management uses habitat modification, biological and finally chemical control to allow humans to produce food, fabrics and to limit the vectors which spread disease. This book does not take into account that professionals are licensed and educated to deal with these pest without harming people, pets or the environment. If you enjoy biting into an apple and finding half a caterpillar or picking the larvae of meal moths out of your morning bowl of granola, this is the book for you. If you, however, have pulled cockroaches out of the ear of a two-month old child or seen the result of a severe bedbug infestation in a home for developmentally disabled adults then you will find this book infuriating. Either way, do not operate heavy machinery while listening to it.