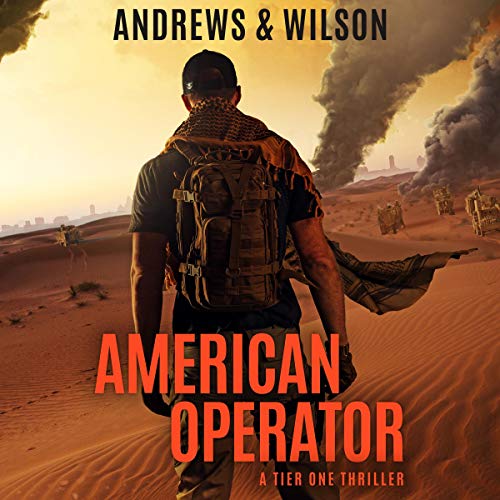 By: Brian Andrews,Jeffrey Wilson
Narrated by: Ray Porter
Try for £0.00

An explosive, high-stakes thriller of espionage and counterterrorism by the Wall Street Journal bestselling authors of Tier One.

A shocking attack in Ankara leaves the US Ambassador to Turkey dead and his chief of staff, Amanda Allen, in the hands of brutal terrorists. But Allen is no ordinary diplomat. She’s undercover CIA. The DNI and the President turn to Ember, America’s premier black-ops task force, and its deadliest weapon, former Tier One Navy SEAL John Dempsey, for help. To find Allen, Ember gets embedded in the most dangerous battlefield on Earth: Syria. But when all communications are disabled by an attack in Turkey, Dempsey finds himself with no backup - a lone shadow warrior racing against time to rescue Allen from her captors before she reaches her breaking point.

What Dempsey doesn’t realize is that Allen is just a pawn in a much larger game. A new player has already been unleashed: a legendary mercenary who matches the American Operator in skill, tactical prowess, and a killer instinct for survival. Now there is far more at stake than a kidnapped CIA agent. Dempsey and his team better get this one right, because the balance of power for the entire Middle East hangs in the balance. And the new threat is far more dangerous than any Dempsey has encountered in his decades waging war against terrorism. Game on.

What listeners say about American Operator

Had me gripped right from the outset. The continual plot twists kept you wondering what could possibly happen next. Even down to the frustrations when all dies not go as planned.

loved all the books in.the series, cannot wait for the next one to be released!

Best in the series so far

Brilliant book and the closes one story arc whilst .nicely setting up stories with future enemies, intrigue, politics and intrigue perfectly.

Andrews and Wilson have done it again!

This is book four in the Tier One series. Andrews and Wilson have consistently written solid military/espionage books. These books are all stand alone and can be read in any order. Being slightly retentive I prefer listening in chronological order for continuity of character development.
Once again this publisher's summary pretty much lays out the plot. If I say too much more I will spoil this for others.
Keeping that in mind , this is so good. The protagonist is John Dempsey. He thinks of himself as a weapon but comes up against an antagonist who is just as well trained and just as deadly.
This is a fast paced story that kept me on the edge from "cover to cover!" The hardest part for me was the cliffhanger ending!
Ray Porter, as always, narrates this book flawlessly.
My HIGHEST RECOMMENDATIONS.
If you found this review helpful please indicate so.
Thank You.

Authors of military thrillers tend to put too much emphasis on action at the expense of plot. Andrews and Wilson assure that action and suspense occur within plot parameters; the plot gets top priority. But there are also plenty of action and suspense. That makes Tier One Thrillers the very best of the genre.

The series protagonist goes by the nom de plume John Dempsey. He is supposedly dead. His wife and son are not aware he is alive. Tier One which he leads is a secret organization which reports indirectly to the US President. In AMERICAN OPERATOR Dempsey and his team are tasked with recovering the kidnapped CIA agent Amanda Allen in Syria. Allen's father is Chief Justice of the US Supreme Court. She was kidnapped in Turkey where she was assigned to the US embassy. NATO member Turkey has become to close to Russia.

Narrator Ray Porter really shines in this novel and this series. He demonstrates again that he is one of the very best.

I recommend the Tier One series by be aware that it is addictive!

Another EXCELLENT addition to this series. Recommended without hesitation! The only bad part is knowing that I now have to wait for the next installment!

There is only one problem with the very few books that land into my "Fricken Awesome" file, they all end, leaving me wanting more right fricken now!, & I have to wait for the Fricken Authors to continue or conclude their Fricken awesome story sometime when they Fricken feel like it! And that's not Fricken awesome, it's just Fricken frustrating, but in a good Fricken way...
However, all the "Fricken Awesome" file landing books also share much in common:
Incredible stories, brilliantly written, believable action sequences that leave one with only an acceptable amount of eye rolls, (no Audible groans allowed) with correctly built & placed tension & humor (appropriately placed to relieve the humor & tension!)
But the peastro resistaunts, (damn, Google spell checked 5he heck outta that & still made a mess outta that French quote!) is the marriage of the right narrator to the Authors written word!
As we've all have experienced, the wrong or just plain bad narrator/narration quickly destroy all the Authors hard work while making us feel like someone stole our lunch money.
This reaction is often accompanied by the hearer experiencing spontaneous blood flow from one or possibly both ear holes & instant vulgarity involuntarily, yet freely, falling outta that hole in your face people often refer to as a mouth!
Ah, but a great narrator married to a "Fricken Awesome" book makes us drool @ the thought of them just reading the phone book! (common folks, you know you've read that pearl of wisdom quote in a reviews)
Yup, Fricken Awesome books deserve a Fricken Awesome Narrator, it's magical, it's meaningful, &, its better than bad sex!
So, in conclusion, this read is all of the above & less! (less the bad book/bad narrator part) & all of the good stuff!
So, as previously mentioned, this book is Fricken Awesome, its narrated by one of the best narrators on the Fricken planet who absolutely nails the read leaving me with strangest feelings of disappointed pleasure,. wanting more!
I sincerely hope you enjoy this read as much as I did...
It's Awesome,l!

Hard to find a stopping place.

Yup ,once te story gets going it's hard to find a place to stop. You want to know where every engagement is headed. well written, good characters, and great performance.

Another great addition to Tier 1

You can borrow book & audio via KU. Love this series so much I go ahead and buy the Audible as soon as they’re released. It’s actually less expensive to buy the ebook for $5.99 & add the audio for $1.99 for less than the cost of a credit.

Ray Porter is phenomenal as a narrator ~ seamlessly switches between accents, personalized voices, genders, etc. With a cast of characters as large as this ~ it’s quite the achievement. He also maintains the same voice for each character across all the books, you can listen to them back to back and it’s like he recorded them in a continuous stream.

This opens about a year after the end of Crusader One. It’s possible to listen to this all on its own as we’re beginning a new phase of Ember and many of characters have shifted into new positions. (I can’t recommend the first 3 strong enough though.). An undercover CIA agent has been taken hostage and Jack Dempsey, along with the rest of Ember, are working to rescue her.

I love that we’re getting to know secondary characters better, especially Grimes. As with the other books, we’re treated to several action packed sequences, military OPs, and political posturing. I’m so impressed that Andrews & Wilson give us even more female characters that are strong, intelligent, and vital members of their respective agencies/teams. No TSTL characters here.

Tier one is top tier thriller

In a crowded marketplace this stands out, tons of action, good lovable characters. Porter puts it over the top AS ALWAYS. I’m a fanboy of this guy wow he does these authors a favor raise your fee sir... raise your fee!

! If If you want a smart, exciting action packed thriller, this is your series!

Fantastic addition to the series! Can’t wait for the next book! ! If you want a smart, exciting action packed thriller, this is your series!

The authors have written a fantastic novel of intrigue with lots of twists and turns. The narrator Ray Porter does a excellent job of drawing you in and bringing the characters to life!

They seem to just get better. great plot , new characters are good , and of course can't beat Ray Porter