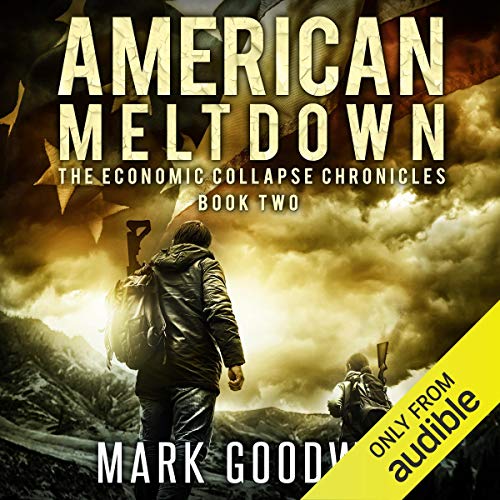 By: Mark Goodwin
Narrated by: Kevin Pierce
Try for £0.00

Written from a Christian constitutional worldview, American Meltdown, Book Two of The Economic Collapse Chronicles uses dystopian fiction to take an in-depth look at the economic and political trends that have taken America to the edge of bankruptcy. The book assesses the current course of the nation and projects it into the near future.

In Book Two, America has entered into a full scale financial meltdown. The members of the Bair family do the best they can to navigate a complete currency collapse and the social disruptions that come with it. Having relocated to a rural area in Kentucky, the Bairs fare much better than the unfortunate masses still trapped in the cities.

In an effort to cling to power, President Anthony Howe announces the confiscation of provisions and guns. Several states, led by liberty-loving Senator Paul Randall, stand up to assert their sovereignty.

Knowing the intentions of the Federal Government, Matt, Adam and Wesley Bair train with the local militia who have determined to draw a line in the sand and defend the last remnants of liberty. The political conflict escalates into military aggression and the gloves come off.

What listeners say about American Meltdown

What made the experience of listening to American Meltdown the most enjoyable?

The eerie feeling that this can really happen.

It sounds so real.

This book and the other two in the series are awesome books. Could not get enough of them and finished this one in three days!

This book gives you a lot to think about!!

It makes a person think what they'd do in this very real and possible situation.
One thing I notice is the author give the females in the book very passive rolls. Women are stronger than he writes and would work and fight along with men to defend our country, God, children and way of life.

I am enjoying this series. The premise isn't as far-fetched as some would probably like to believe, too. When men and women care about style over substance, and vain glory over sacrificial service, are thrust into positions of power, they will stop at nothing in pursuit of their agenda. It could happen today. This author has a great awareness of current events and economic circumstances, and plays the potential realization of the consequences that may follow because of them.

Exciting addition to the series. Builds upon the first installment very well. Cannot wait to finish the series. I highly recommend.

Without God, we are nothing

All of Mark Goodwin’s books are absolutely fantastic and just keep reminding us of how much we need Jesus for protection and peace and how we have to take practical steps to be in this position.

Another Homerun from Goodwin

Loved it. well written and a very exciting storyline. Kevin does a great job as well

Mark Goodwin has some prophetic insight to our world! While listening to these books, I feel like we are going through this right now. It's only a matter of time!!!

Great depiction of the end of the dollar

This is a very real depiction of the collapse of our currency and what would follow if we do nothing to curtail the rampant borrowing and spending being done by our government. It is a wake up call to all of us not just the prepper or militia types.

We can only hope for this kind of outcome

Would you listen to American Meltdown again? Why?

Yes, There are nuggets of preparedness throughout the book.

What was one of the most memorable moments of American Meltdown?

Who was the most memorable character of American Meltdown and why?

Not as good as Book 1, but still a good read. Too much talk about politics for my taste, more preachy in this Book 2 as well. In chapter 19 the prayer seemed disrespectful, as if giving God commands instead of supplicating Him humbly, but that impression may have been a result of the reader. Mostly happy with the reader.

Prayer based on Psalm 3 good - and taking the 1 minute to pray even when under stress very smart. Other prayers very good.

Very interesting story line about Jack and Tina's ordeal due to their leaving almost too late. Lots of interesting character development; nice organization of the coalition community.

Re politics, naïve to think all coalition members Good and all Federals Bad.

A lot very good in the book...living off the land with pellet gun, use of Dakota fires, need to work and be productive, reboot economy via barter, recognizing how useless money is, basing conduct on Bible guidelines.

Ending very good with hero reflecting on memorized scriptures while in prison.

I can recommend this book, although I do not agree with everything in it.