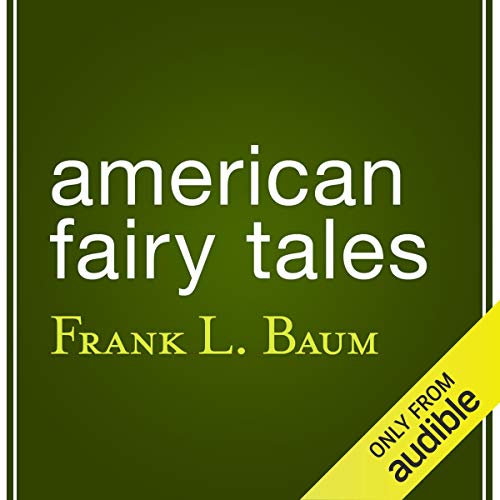 By: L. Frank Baum
Narrated by: Samantha Worthen
Try for £0.00

L. Frank Baum, author of the Oz books, produced yet another children's classic with this amusing collection of fairy tales. Not just for children, narrator Samantha Worthen's bright performance will have many adults fondly remembering the experience of having a bedtime story read to them. Listeners will be entranced by stories about mannequins coming to life, magic bonbons, a polar bear without a fur coat, and many more. Worthen's flexible voice captures the personalities of the different characters, as well as many of the stories' subtly satirical and tongue-in-cheek tone.

A great listen for children! American Fairy Tales by L. Frank Baum includes classic stories that will keep your child riveted. In fact, it will keep the average adult entranced! The story lines and scenery created by the author are a thing of beauty. Vivid conversations between characters create an imaginary paradise your son or daughter can wander through for ages to come.

Includes "The Box of Robbers", "The Glass Dog", "The Queen of Quok", "The Dummy That Lived", "The Wonderful Pump", "The Magic Bon Bons", "The Laughing Hippopotamus", and "The Mandarin and the Butterfly".

L. Frank Baum wrote the dozen stories in this collection in 1901, the year after publishing "The Wizard of Oz." Unlike the classic Wizard of Oz, these stories were aimed more at adults, being serialized in several newspapers before being published as a children's book. The stories run more to sly tongue-in-cheek humor but less to magical fantasy, or adventure. The stories are:
1. The Box of Robbers
2. The Glass Dog
3. The Queen of Quok
4. The Girl Who Owned a Bear
5. The Enchanted Types
6. The Laughing Hippopotamus
7. The Magic Bon Bons
8. The Capture of Father Time
9. The Wonderful Pump
10. The Dummy That Lived
11. The King of the Polar Bears
12. The Mandarin and the Butterfly

The general theme runs to cautionary tales about carelessness, greed, arrogance, and foolishness. The most widely reprinted story was "The Magic Bon Bons", where enchanted candies are accidentally eaten by respectable citizens at a dinner party, leading to chaos. My personal favorite of the bunch was "The Wonderful Pump", which starts as a very traditional fairy tale of a poor farmer's wife, whose kindness to an animal in distress is magically rewarded. It takes a turn though, when the poor couple doesn't understand the limitations of their reward, and there is surprisingly deep thinking from a minister and from the animal himself, advising the couple on the nature of wealth and abundance.

There are many dated stereotypes, none particularly offensive except for reinforcing negative racial stereotypes. For instance, "The Box of Robbers" has a trio of Italian bandits who are bewildered to find themselves in America, but nonetheless feel obligated to rob and plunder as is their nature. The Laughing Hippopotamus is set in Africa, with primitive natives, and the last story has an obnoxious Chinese villain who meets his just reward.

I am fond of L. Frank Baum's writing style, his deadpan jokes, absurdist satire, and philosophical musings, soI I found this book rather charming on the whole. I would not recommend it for young children though, as some of the stories are rather gruesome by modern standards, and most are set in a turn-of-the-19th-century America that today's kids won't relate to.

The narrator, sadly, is merely adequate, and does dreadful voices for most of the male characters. There is also an odd technical glitch in "The Dummy That Lived." The story opens describing a store window manikin who is holding an advertising card, and the narrator jumps past the words on the card. Here is what the book says:

The wax lady was beautifully dressed, and extended in her stiff left hand was a card bearing the words:
"RARE BARGAIN!
This Stylish Costume
(Imported from Paris)
Former Price, $20,
REDUCED TO ONLY $19.98."

Fairy tales, some of unusual or of a different nature, makes one wonder when these were written originally. Short stories are convenient for stopping and starting. 1 narrator playing (speaking) all the roles gets confusing and sometimes boring.

I was excited to consume something new by L. Frank Baum, but I was not able to complete this title; the narrator's performance really made this hard to finish. The cadance and tone are deeply reminiscent of Microsoft Mary. Presumably in an attempt to make this title more accessible to children, this performance has sacrificed the consideration of adult audiences.

The narrator's really ruined this for me. It's perhaps that I'm picky, but they sound like a bad acting class.