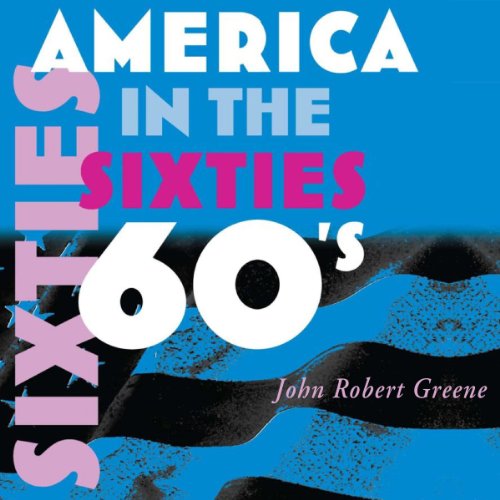 America in the Sixties

By: John Robert Greene
Narrated by: Chris Munson
Try for £0.00

Sandwiched between the placid fifties and the flamboyant seventies, the sixties, a decade of tumultuous change and stunning paradoxes, is often reduced to a series of slogans, symbols, and media images. In America in the Sixties, Greene goes beyond the cliches and synthesizes thirty years of research, writing, and teaching on one of the most turbulent decades of the twentieth century.

Greene sketches the well-known players of the period - John F. Kennedy, Lyndon B. Johnson, Martin Luther King Jr., Malcolm X, and Betty Friedan-bringing each to life with subtle detail. He introduces the reader to lesser-known incidents of the decade and offers fresh and persuasive insights on many of its watershed events. Greene argues that the civil rights movement began in 1955 following the death of Emmett Till; that many accomplishments credited to Kennedy were based upon myth, not historical fact, and that his presidency was far from successful; that each of the movements of the period-civil rights, students, antiwar, ethnic nationalism-were started by young intellectuals and eventually driven to failure by activists who had different goals in mind; and that the "counterculture", which has been glorified in today's media as a band of rock-singing hippies, had its roots in some of the most provocative social thinking of the postwar period.

Greene chronicles the decade in a thematic manner, devoting individual chapters to such subjects as the legacy of the fifties, the Kennedy and Johnson administrations, the civil rights movements, and the war in Vietnam. Combining an engrossing narrative with intelligent analysis, America in the Sixties enriches our understanding of that pivotal era.

The book is published by Syracuse University Press.

What listeners say about America in the Sixties

Deep look into a pivotal era of American history.

Narration is consistent through out giving the work a pleasurable life.
The work also declines to superficially skim the decade but delves into a more through explanation of the times and events. It also gives a setting for what happened making sure to mention the totality of the populous rather than only focus on the notable people and movements typical covered in works about the 1960's.

Very informative on multiple levels of the issues of the civil rights movement in the 60s.

The sixties in a nutshell.

I lived through the sixties and can say that this is a great concise history.