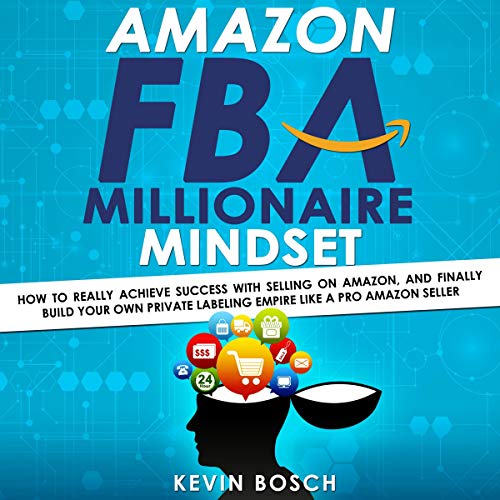 By: Kevin Bosch
Narrated by: Taylor Noble
Try for £0.00

If you are interested in building a successful Amazon FBA business that makes you thousands of dollars every month in passive income...while sipping on some piña coladas and getting golden tans on the beaches of Hawaii...then keep reading to this very important message....

Ninety-five percent of people fail with Amazon FBA, but why?

The culprit usually isn’t a lack of knowledge...I mean, there’s tons of courses and free content floating around the internet.

Rather, the culprit is the self-sabotaging negative mindset that most people are programmed with.

And if you’re reading this right now, and you’ve never had a taste of success...or maybe you’ve had a little bit of success but you’re not quite there yet....

Then it’s not your fault!

It’s just the poor mindset that you’ve been programmed with growing up.

And this is exactly why I am so excited to introduce you to my new book titled Amazon FBA Millionaire Mindset.

Inside this book, you’ll discover:

So if you want to be equipped with a millionaire’s mindset and truly experience success with Amazon FBA, get Amazon FBA Millionaire Mindset now.

This whole concept of mindful eating is such a contrasting approach to all these other popular diets. But in my opinion, I believe that it should help readers get a grip on their bad eating habits

Ms. Oakley’s book has guided me to have a better attitude towards eating. The secret is learning to savour and appreciate the foods you’re eating, so that you can have a healthier relationship with food and prevent overeating.

I gave this to my brother who’s been struggling with his weight his whole life. And to our surprise, the mindful eating method did actually helped. Still a work in progress, but this is the 1st time he’s experienced results.

The author had such an artistic and distinct writing style that simply sounds original. And aside from the cool writing style, the content was pretty rad too.

Wow. What a complete sigh of relief. I’m so glad to have found this book.

This is a solid tool for those looking to end their life-long struggle with weight loss. The ideas and plans suggested in this book are easy to follow, making it ideal for the readers.

Our eating habits are what shape our lives, and the author also means that literally. This book has opened my eyes on how certain eating habits can be very destructive. Overall, I’d recommend this book to the sufferers!

This book is just packed with good information. Having struggled with being overweight for a decade now, this book has done a marvelous job on kick starting my weight loss journey.

The author wants to bring awareness to the national crisis with obesity as well as food addiction. And she hopes to bring value to the world by helping readers solve their problems. So for all sufferers out there, please allow to seek some professional help like this one.

I really enjoyed the perspective of this book. The book was entertaining, engaging, and broadened my awareness when it came to my own eating habits.

World-class at what he does

save yourself the money and get a different book. Everything you hear in this book you can get from googling "self motivation" or "motivation to start a company" or "how to be an entrepreneur". I did not like this book at all

For anyone into the FBA zone this is the perfect reality check motivational tool. Thanks

This book was all-around helpful, inspiring, and just what I needed to break up the more technical FBA books I’ve been listening to.

On a funny note, the narrator can’t really say “millionaire” or “Audible” which is semi insane but makes me chuckle every time he says either.

There were also some good claims, like “You’ll literally be 3 feet from gold.” Literally? I hope so.

All in all, it’s worth the time and money if you’re in need of a little motivation.

Great Book! Very Inspiring and Informative. I can always use advice on how to become and stay successful!

I really enjoyed this book it was very inspirational and very detailed and what I need to do to become a successful Amazon seller. I would definitely recommend this book!!!

It’s a great book. I really liked the chapter on the 4 phases. It was new and something I’ve never heard of before.

This book really gave me the motivation I needed to crush it in 2019! Let’s get it and this time, I will never give up and always keep my enthusiasm to a level 10.

I absolutely loved this book! It was a short, light read but it was packed full of golden nuggets.