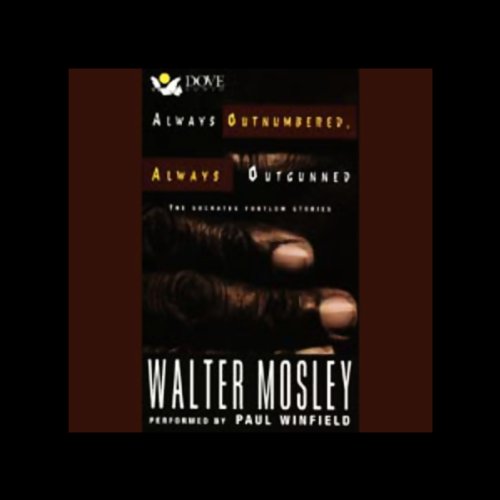 Three decades ago, the young Socrates Fortlow, in a burst of drunken rage, murdered a man and a woman. Free again, after 27 years of hard time, Fortlow is living in an abandoned building, scavenging bottles and delivering groceries to barely eke out a living.

In each of the stories that comprise this richly brooding novel, Socrates, like his namesake, questions the morality of the world beset with crime, poverty, and racism that surrounds him. His unforgettable presence and his perceptions cast a glow of somber lyricism upon an often harsh world. This is the debut of Walter Mosley's most compelling new character since the introduction of detective Easy Rawlins.

"On rare occasions, the skill and talent of author and narrator are both fully realized in one production; Mosley's latest is a shining example. (AudioFile)

What made the experience of listening to Always Outnumbered, Always Outgunned the most enjoyable?

I loved the pace of this book, along with the characters. Having grown up in LA I enjoyed getting to know these characters, almost feeling like they are people I could run into. I also loved the broader implications of social issues that he tackles with thought and eloquence, while still telling a damn good story.

There is so much writing that is not good. Then you get a book like this. What makes this book different? Juxtaposition, that's what. Socrates is good and bad. He's conflicted. The story in the diner with the thief completely shakes my world. I had to read it three damn times to come to terms with it. This is an uncommon book, seriously. It's for someone intelligent who wants to grapple with complexity. in other words, my mom wouldn't like it. But it rules someone like me!

I don’t think I’ve ever heard a finer performance by an audiobook reader than Paul Winfield’s rendering of these moving and compassionate stories.

I'm hooked great story, jam packed with suspense. Finished the book in one Day, I could put it down.

I totally love this book, The story is on of a kind and it teaches you some deep lessons about life.