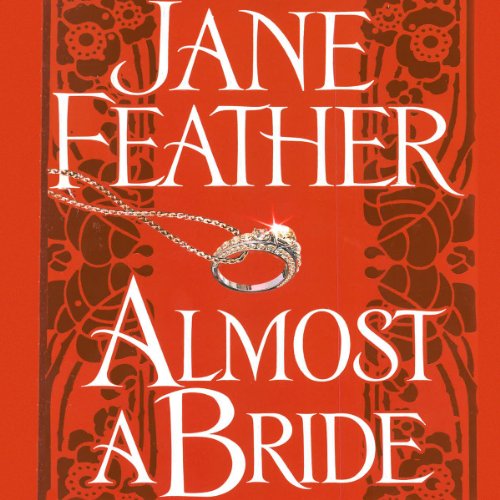 There are few bigger names in romance than Jane Feather and in Almost a Bride she introduces perhaps her most compelling love story. Jack Fortescu is a rogue and a gambler. Arabella Lacey is a dignified and intelligent woman. So what happens when she finds herself thrown together by circumstances with this handsome man? Karen Asconi gives a wonderful performance as the voice actor for this tale of lust and relationships. Asconi does a great job capturing the humor and wit in all of Arabella Lacey's sharp remarks. Her steamy romance scenes are not to be missed!

In this spectacular new romance from acclaimed New York Times best-selling author Jane Feather, fate deals one stubbornly single young woman and one deceptively heartless man a shocking hand in a high-stakes bet. But is love in the cards?

Jack Fortescu gambles to win, and this time his prize is not only his rival’s lavish mansion but everything in it–including the man’s beautiful sister! But when it comes to games, Jack has met his match. . . . Left homeless by her brother’s escapade, Arabella Lacey has two appalling choices: pack her bags–or agree to marry the lunatic who’s taken over her house. Why would such a handsome–and outrageously wealthy–man want such an unromantic arrangement? Arabella intends to find out, and have a little fun in the process at Jack’s expense . . . literally. As Jack discovers that his reluctant bride is no ordinary beauty, he feels a stir of admiration, among other emotions, that wasn’t part of the bargain. Now he’s the one with everything to lose.

Struggled to finish even with the first few chapters.Narration and story sounded like a stuck up granny.I have listened to quite a few audible books but this was the worse.I'm sorry that I ever bought it.What there was a way that I can permanently removed it from my list.Whst a waste of a credit