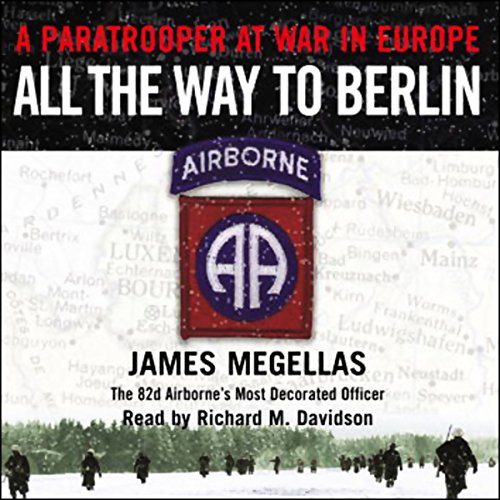 All the Way to Berlin

By: James Megellas
Narrated by: Richard M. Davidson
Try for £0.00

In mid-1943 James Megellas, known as "Maggie" to his fellow paratroopers, joined the 82nd Airborne Division, his new "home" for the duration. His first taste of combat was in the rugged mountains outside Naples.

In October 1943, when most of the 82nd departed Italy to prepare for the D-Day invasion of France, Lieutenant General Mark Clark, the Fifth Army commander, requested that the division's 504th Parachute Infantry Regiment, Maggie's outfit, stay behind for a daring new operation that would outflank the Nazis' stubborn defensive lines and open the road to Rome.

On January 22, 1944, Megellas and the rest of the 504th landed across the beach at Anzio. Following initial success, Fifth Army's amphibious assault, Operation Shingle, bogged down in the face of heavy German counterattacks that threatened to drive the Allies into the Tyrrhenian Sea. Anzio turned into a fiasco, one of the bloodiest Allied operations of the war. Not until April were the remnants of the regiment withdrawn and shipped to England to recover, reorganize, refit, and train for their next mission.

In September, Megellas parachuted into Holland along with the rest of the 82nd Airborne as part of another star-crossed mission, Field Marshal Montgomery's vainglorious Operation Market Garden. Months of hard combat in Holland were followed by the Battle of the Bulge, and the long hard road across Germany to Berlin.

Megellas was the most decorated officer of the 82nd Airborne Division and saw more action during the war than most. Yet All the Way to Berlin is more than just Maggie's World War II memoir. Throughout his narrative, he skillfully interweaves stories of the other paratroopers of H Company, 504th Parachute Infantry Regiment. The result is a remarkable account of men at war.

"Strongly put and unsentimental, this memoir is a must for the World War II collection." ( Booklist)
"Davidson gives a splendid performance. His deep, gravelly voice gives a steady, no-nonsense performance." ( AudioFile)

What listeners say about All the Way to Berlin

As my generation was being born, the brave one preceding us was giving their all so that we could live free! Thank you to those heroes and their loved ones who suffered unimaginably!
This was the firsthand account of such noble individuals!

Not enough story to the book. It sound like a travel itinerary.