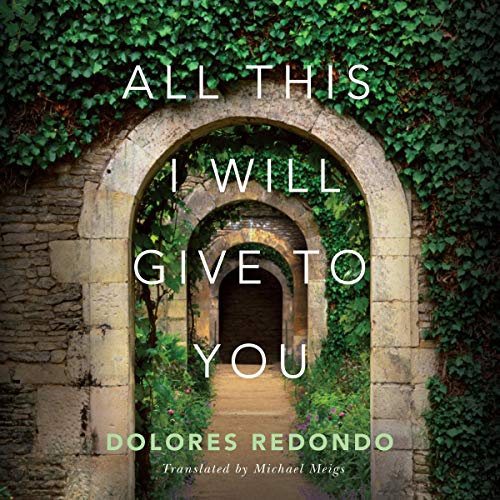 All This I Will Give to You

The award-winning international bestseller about the secrets and lies of one man that lead another into a treacherous house of strangers...

When novelist Manuel Ortigosa learns that his husband, Álvaro, has been killed in a car crash, it comes as a devastating shock. It won’t be the last. He’s now arrived in Galicia. It’s where Álvaro died. It’s where the case has already been quickly closed as a tragic accident. It’s also where Álvaro hid his secrets.

The man to whom Manuel was married for fifteen years was not the unassuming man he knew.

Álvaro’s trail leads Manuel deep into one of Spain’s most powerful and guarded families. Behind the walls of their forbidding estate, Manuel is nothing but an unwelcome and dangerous intruder. Then he finds two allies: a stubbornly suspicious police lieutenant and Álvaro’s old friend - and private confessor - from seminary school. Together they’re collecting the pieces of Álvaro’s past, his double life, and his mysterious death.

But in the shadows of nobility and privilege, Manuel is about to unravel a web of corruption and deception that could be as fatal a trap for him as it was for the man he loved.

What listeners say about All This I Will Give to You

After a long wait I was disappointed

disappointing after the excellent trilogy. Also the translation was for the American market and became irritating

Brilliantly written, performed and a great in depth story. Definitely getting more of the authors works.

I usually only listen to epic fantasies, but the last few books I’d selected fell short. I was scrolling through the Audible only selections looking for a free book and came across this one and I’m so glad I did. It wasn’t one of the free selections, but it was without a doubt one of the best I’ve come across in a while. It starts off great, increases momentum and ends great. Love the intrigue, twists and turns and speculation made through out the story. This is a must read!

Translated from Spanish, there were numerous awkward sentences, but certainly not enough to hinder the flow or pace of the book. The biggest problem I had was keeping the names straight. The performer was so fluid with the names (people, locations, businesses) my desiccated ears had trouble distinguishing them. The story, however, was marvelous and kept me enthralled to the last word. The dialogue was very believable and, thanks to the performer, easy to follow. The twists and red herrings in the plot were extremely credible as we were easily able to follow the thought process and the perspectives of each of the major characters as they struggled (with us) to make cogent sense of the situations. There were no secrets or withheld information which the major characters possessed. We knew everything they did (and sometimes more) so our attempts to solve the increasingly convoluted puzzle was happening in real time. I thoroughly enjoyed the book and believe fans of serious “detective” stories will love it.

An interesting setting, detailed characterization, mystery--what is there not to like? Well, the pacing is just this side of paint drying; the narrator seems to be a soporofic, and Gallicia, which should be a magical setting, never comes alive. It is hard to care much about the characters, and the mystery does not engage the listener much. Others may like this, but perhaps I should put it this way, it seems as if it is an overly literary approach to a mid 20th C or earlier British who done it of manners, taking place in rural Spain rather than in English outskirts among the aristocracy, missing what in the best of them could be noted as a tightness of plotting. This is less plotting and more plodding. I wanted to like this for all its surface charms, but half way into it I cannot stay awake long enough to finish it.

A Cozy Masquerading as Noir

Long ago I learned to distinguish mysteries between the “cozy,” or classic whodunit, and noir. The fundamental difference between them is that, implicitly, solving the mystery of the cozy restores a comfortable order while, whatever the specific crime of the noir, we’re led to see a deeper and unhealed corruption.

In that equation, give me noir any day. I don’t ask to celebrate the fact that the universe is fundamentally disinterested in us, but, respecting that perspective, I’m routinely stunned by the eloquent, doomed heroic, and dark view the genre presents.

I do understand, though, that the whodunit cozy has its fans. There’s something reassuring in the sense that an intrepid detective can arrive on the scene and straighten everything out. It’s a fundamentally optimistic view of the world, whether we get it in the mode of Agatha Christie/Murder She Wrote or in something darker, like this.

To put it simply, then, All This I Give You is a cozy mystery with many of the trappings of noir. There are noir dimensions to it. In one I wish Redondo explored more we learn that the Marquis’s family fortune came about because he threw in with the Franco regime. In other, much more elaborated possibilities, we see the sexual politics and drug-addiction-as-consequence of socio-political pressures.

As the novel proceeds, though, Redondo downplays most of that dark material in favor of the classic detective narrative. [SPOILER: If you doubt any of that, consider the way the novel ends with the reveal that our protagonist’s husband was heading back to him at the end – it’s a “you were right about your love” kind of moment, complete with the satisfaction that the conniving sister-in-law can be proved to have an “heir” by the wrong man, leaving the fortune and title instead to the loving you nephew. In other words, all’s right with the world at the end.]

Perhaps my biggest complaint here is the method of investigation. Whenever anyone has a question for a potential suspect or for some old hanger-on of the estate, it’ a straightforward conversation. After a while, I found myself thinking of Non-Player-Characters in video games, those figures who have crucial information that they willingly share but only after the protagonist finds his way to them. Otherwise they’re flat and immobile.

I will give Redondo points for a nice ability to throw believable red herrings for our suspects. The ending is satisfying from an unraveling perspective as well as a I-was-fooled pleasure. As it goes, though, it asks a lot of us in the way of keeping characters straight and in filing away precious details that may or may not matter.

As a bottom line, though, I didn’t know to be looking for such clues most of the first half of the book. Yes, I recognized it was a mystery, but I was stuck in the noir world, and I was preparing myself for an ethical vision about the corrupt and homophobic world thwarting our nobler instincts. By the time I realized this was a more modest work – by the time I realize it was a cozy – I was in a hurry to see how this more modest puzzle got solved.

It is well-solved. It’s just not as ambitious as I’d hoped.

I truly enjoyed the narrative and the story. It took me awhile to keep all the names of the characters straight. Would recommend.

The beginning was beautifully written, had me in the first couple of pages. The plot was interesting and I felt for the protagonist. The story did begin to meander a bit and became unbelievable, but I realize it is fiction.
Still worth the listen.

intriguing, modern and interwoven themes with a surprising ending. inviting descriptions of Spanish geography and cuisine.

This book had me hooked from the start. The characters are intriguing and you find yourself drawn in and following Manuel. I loved it. I would urge you to read/listen to this narrative. It is worth every second

I couldn't maintain interest in this story, in part because of the reading. The story is set in Spain but whenever the policemen spoke, the accent put me in New York City. The whole story should have been read with a Spanish accent. There was little distinction in the voices from one character to another. It also needed to be read with more drama for my taste.

This was an incredible story. The characters were so interesting and the narration was excellent. I couldn’t put it down.