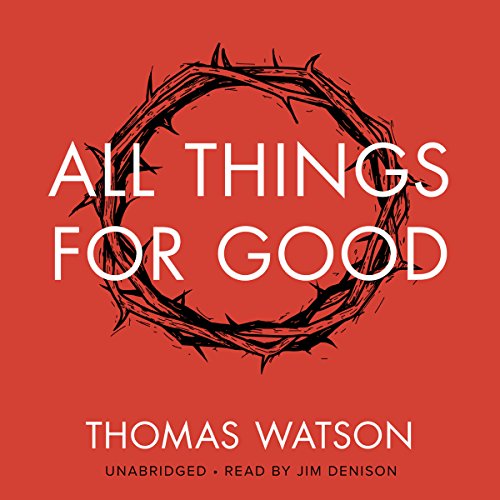 All Things for Good

By: Thomas Watson
Narrated by: Jim Denison
Try for £0.00

All Things for Good by Thomas Watson provides the biblical answer to the contemporary question: Why do bad things happen to good people?

Thomas Watson, the 17th-century minister of St. Stephen's Walbrook, believed he faced two great difficulties in his pastoral ministry. The first was making the unbeliever sad in the recognition of his need of God's grace. The second was making the believer joyful in response to God's grace. He believed the answer to the second difficulty could be found in Paul's teaching in Romans 8:28 - God works all things together for good for his people.

First published in 1663 (under the title A Divine Cordial), the year after Watson and some 2,000 other ministers were ejected from the Church of England and exposed to hardship and suffering, All Things for Good contains the rich exposition of a man who lived when only faith in God's word could lead him to such confidence. Thomas Watson's exposition is always simple, illuminating, and rich in practical application. He explains that both the best and the worst experiences work for the good of God's people. He carefully analyzes what it means to be someone who "loves God" and is "called according to his purpose".

What listeners say about All Things for Good

Although written 350 years ago, the truths in this book remain simple, challenging and encouraging.

I’m come away from this book spiritually refreshed and with many reminders of what brought me to Christ 55 years ago.

Whether you are a Christian or not, I heartily recommend this excellent, well written, easy to understand, and very well read book.

May the Lord bless your efforts in making his true word available in audio. Please continue the good work!

Very pleased to have found this audio book. Very good quality, I believe. Evidently can't be compared with a printed book, but I'm honestly very happy.

I have the Kindle and the Audible versions and used together or listened to is a powerful means for encouragement for the fainting Christian. It exults the God of grace, lifts our drooping faith, and moves us to press on!

every line a treasure

beautiful exegesis. perfect pacing by the reader, dennison. I was tempted to bookmark every other sentence, but had to limit myself to a few choice quotes to share with siblings in Christ so as not to overwhelm them with Watson's rich food.

A well of scriptural insight!

Anyone going through the Sufferings of the Christian life ,would benefit greatly from this work .This book needs to be read a least once a month.

Excellent reminders that All Things Work for good to those that love God AND are Called according to His Will. A biblically sound and monergestic treatment of scripture.

I highly recommend anything by Thomas Watson.
5 stars also to Jim Denison for narration.

So sad to have to be spending almost 2 hrs trying to troubleshoot and still not able to listen to this title.

How encouraging this little book is. What beautiful encouragement and exhortation from the Bible is offered In these distressing days. A balm for the soul.

Wow wow wow! Must listen to this. So many gems in this one by Watson.

Praising God all the way through! God Alone! Helps us truly KNOW these truths about the Sovereignty of God.

I am glad I read this book. I highly recommend it....
It will change your life...