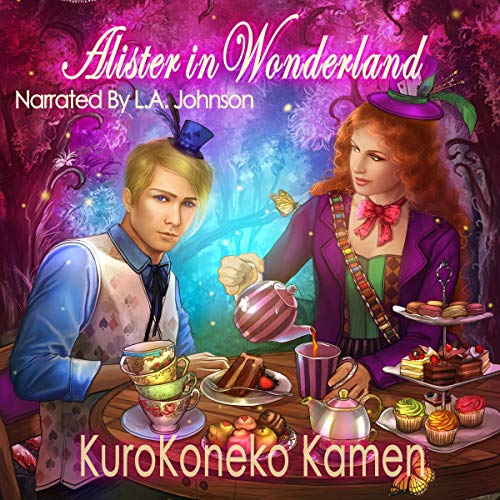 By: KuroKoneko Kamen
Narrated by: L. A. Johnson

A genderbent reimagining of the classic fairytale Alice in Wonderland…

Alister Kingsley is an eccentric, London artist who is famous for his surreal, fanciful paintings set in a land that only exists in his imagination: Wonderland.

Alister’s ‘dream girl’ Madeline Hatter wasn’t supposed to be real. But when the White Rabbit shows up at his art expo, and leads him down the rabbit hole Alister comes face-to-face with the Mad Hatter herself when she rescues him from getting barbequed by the King of Heart’s pet: the Jabberwocky.

As it turns out, Madeline got herself into a pickle, and needs Alister’s help. She has him sign a magical contract that enters him into a tournament to win her hand in marriage. Alister must complete an impossible task, participate in a Wonderland Joust where the rules aren’t exactly normal, and defeat the other contenders: Crimson the King of Hearts, Clover the White King, and the Cheshire Cat slave, Chesher.

Madeline isn’t allowed to help Alister, and Crim keeps sending assassins after his head. Will Alister be able to win the tournament so that Madeline won’t have to marry the sadistic, bloodthirsty King of Hearts?

Take the blue pill and find out…

Fun but not too sweet

Alister Kingsley has had a horrific childhood which he escapes from by painting fanciful pictures of Wonderland. His paintings become sought after but his fame and fortune cannot help his fear. He is scared of everything especially women. He is suddenly plunged into the mad world of his imagination when he follows the white rabbit down the hole. It’s difficult not to write in cliches but KuroKoneko has managed to create a brighter 3D sparkier version of Wonderland. The descriptions are rich and detailed. I was wishing this was a picture book. It was fun but not too sweet. The perfect balance. I really loved this and plan to read more of her stories, I need to know what happens to Crim and Katrina. I voluntarily listened and reviewed an advanced copy of this title. All thoughts and opinions are my own.