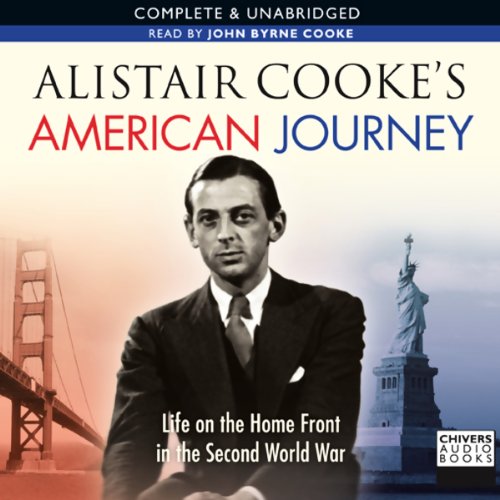 Bringing the United States during World War II dramatically to life, this title presents an introduction to the challenges that faced America at the start of a war long thought avoidable.
©2006 The Estate of Alistair Cooke (P)2007 BBC Audiobooks Ltd

"A time capsule...containing the essence of a vanished America." (Independent on Sunday)

without the warm tones of Alistair Cooke himself ..it just isn't the same. Still wonderfully interesting.

I grew up on Alistair Cooke. The Letter From America was a part of my staple radio diet and taught me the power of the spoken word.

At first it was strange to hear words that were so obviously Cooke's spoken by another voice. At times I found myself stopping the book so that I could replay a phrase in my mind with Cooke's voice.

The content is also fascinating. As a picture of a nation in the early stages of a direct involvement in the war it works superbly. Cooke's genius was always to be able to gather threads, weave them together and present a whole cloth image at the end. This work does not fail. By the end I felt that I had a real feel of a period and place in history about which I knew little. I am sure that a serious historian would find much to add but as a lay view it is superb.

I would have given this 5 stars if only somebody had had the brains to commission Cooke to read it while he was still with us. We shall not see his like again.