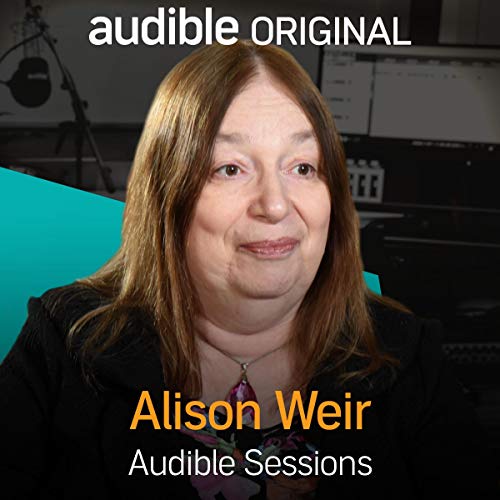 Exclusive to Audible. Join Alison Weir in the studios talking about her ambitious six part series - Six Tudor Queens. Explaining the process of writing a historical novel and how her passion was first ignited, we are given a glimpse into what it takes to write about well-known but often misunderstood historical figures.

Alison Weir is a British writer of history books, and latterly historical novels, mostly in the form of biographies about British royalty. Her first published work, 1989's Britain's Royal Families, was a genealogical overview of the British royal family. She subsequently wrote biographies of Eleanor of Aquitaine, Isabella of France, Katherine Swynford, and the Princes in the Tower.

What listeners say about Alison Weir

Didn't enjoy this interview much. Found Weir to be quite show-offy when it comes to how many pages she's written and how much work it's taken to revise them down.
The fact she hates on other things such as The Tudors and other 'trashy' historical novels makes her sound like she places her works in some sort of magnum opus.
People know that things are dramatised for TV, they're not stupid. In the same breath she says her book (and the subsequent TV series) Wolf Hall is better because it's historically accurate.
Shame that there is such arrogance about the quality of her work as opposed to other authors, not a good way to go around promoting yourself.

I can't get enough of Alison Weir. She is the ONLY historian I trust. She has so much passion for the truth in history and it's so obsessive to her that it makes a true and trustworthy historian. Just love her!!

This short interview left me with a greater trust for what the author presents, ,historically, in her books. In reading historical novels, there is always, in the back of my mind, a question as to whether what I am reading is historically accurate ,or at least most plausible. I get the feeling this author loves her subject and goes to great lengths to remain true to it, without regard to what would make the story more exciting, thus increasing probability of making money off it. I appreciate this about her and am left to just enjoy her stories, with the knowledge they are as factual as they can be.