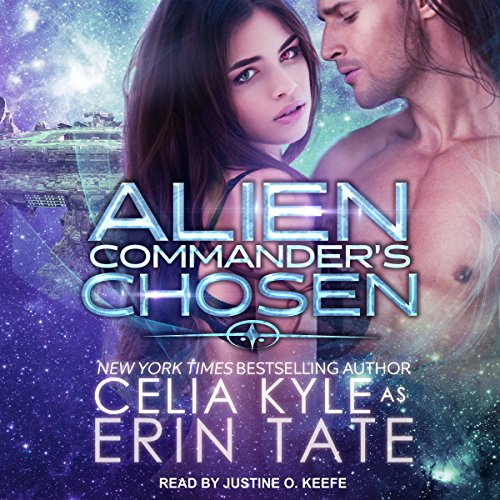 What does a too-nosy secretary have in common with an alien? Nothing. Until she's turned into an alien, too. And then, well, there's everything.

Joyce's life is mapped out: dead end job, after dead end job, until she is dead. At least, that is until Kede Tria - a Doshan alien - shows up and takes her away from it all. Literally. He's overbearing, possessive, sexy as hell, and everything she never knew she wanted in a man, er, alien.

Of course, life happens and she discovers Death by Chocolate isn't just a dessert, it's a reality. Good thing Kede is there to save her...by making her Doshan.

Kede Tria is the Holder of House Tria, commander of the starship Vehly, and one of the most feared Doshan warriors. He's also Joyce's life mate - her harau. His curvy, deliciously lush mate just doesn't know it yet. She was human and now she is Doshan, but through it all she remains one thing: his.

Kede will fight for what belongs to him. So, while others are intent on ending her life, they do not realize he will gladly end theirs.

It started off well but...

The beginning great 👍, but then halfway through listening .. Like nearly every romance i listen to lately , doesn't matter what subgenre it is, it gets boring. Stopped this one halfway through , it just drags on blah blah blah... It's a shame cause from the start my fingers were crossed for a good bit of escapism, it just didn't deliver. I will say the narrator in the book was great, plenty of inflection in light and dark to bring the characters to life. She delivers the bits of funny in the book perfectly and at the start had me chuckle, I just got bored halfway.

I will be listening to other books narrated by Justine O.Keef for sure though, just won't bother with the author . Maybe if you can hang on in there listening it picks up again , sadly I'm giving it a miss.

loved it, I laughed so much, she's got such a potty mouth listened to it twice, good story. Justine O Keef voice the character so well just could not stop laughing

This is an enjoyable story and would be a great start to a series. I can only hope that there will be more books in this series.

No spoilers or mentions of whats in the book as the blurb is sufficient. I wasnt sure what to expect from this as the audio book hasnt got the same name as the book so i brought it with whispersync BUT with in the 1st paragraph it had me physically chuckling by end of the 1st chapter i had laughed hard a few times to the point of tears (yep im one of those laugher's; loud and tear filled laughter like the emoji) i found this book so entertaining i decided to link it to my moms bluetooth in the car so she could enjoy it as well without my daughter in the car (shes a minor) within minutes she was laughing too. definitely worth the money. glad i found this one, i shall be listening again to it in the future to cheer me up when my day isnt going to plan. the witty well written book coupled with justine's vocal intonations made it a well met match. many thanks to the authors and Justine for this lil treasure.

I listened to this book again while waiting for my friend in hospital. I forgot how good it is.

Justine's narration was grwat., she had me laughing out loud a few times.

I real hope Celia and Erin decide to publish more of this series in audio format.

I thought the male was Great! there was good humor! potential for a good story, but I couldn't finish it. I couldn't stand the female. I am well into the story and she is still a screamy bitch!! she asks questions but stomps on every answer, she thinks he is sexy and wants him around but screams at him non stop then is pissy when he isn't around. she has grown up in a society where there are aliens and had worked for a company that delt with the interaction between races, yet she goes around demanding everyone act and behave like humans. I'm sorry, I just couldn't stand her.

This was an interesting and entertaining take on a sci-if romance. At times I felt the heroine was a bit ditsy, but overall it was a well written and enjoyable listen. The heroine is an “accidental” ambassador of Earth. The hero is the commander of the Doshan ship that is in Earth orbit to choose an ambassador, during discussions of Earth joining a planetary coalition. Unfortunately, the Earth representatives are sneaky and underhanded! I liked the scene especially, near the end of the story, where the leaders of the Planetary Coalition are there to decide her fate. Narration was done well.

Joyce, a secretary, is in the wrong place at the wrong time and literally runs into Commander Kede Tria. His species has a NO TOUCH RULE and their society harshly punish those who break it. He is there to choose earth's ambassador to travel on the Doshan ship and chose Joyce, the woman who tripped and ended up in his arms. Even though Joyce wasn't part of those selected as a potential ambassador the Commander has made his decision and it's final.

Joyce is a clueless dingbat that trouble easily finds. When she wakes up naked on the alien's ship her salty language begins to fly. Joyce being Joyce drops a few F-bombs resulting in the entire crew of the ship saying YES, PLEASE to her unintended invitation because Doshan society take things said literally.

Kede and Joyce are attracted to each other but their different customs keep things interesting. It is a roller coaster of misunderstandings.The book kept me in stitches.It is action packed hilarity from start to finish. I loved Joyce's internal dialog with herself and the convoluted arguments she and Kede have.

I loved this book and wish there were more on audible by this author or authors similar to this one.

This was a great book I can’t wait for book 2!!! A few things one I hope the next heroine is more confident and less wishy washy also that the next book moves faster. It was slow at some points. I personally really like the narrator she did a good job!!! Over all it’s worth listening to cause the last part is Amazing!!! Highly recommended
LMM

The story had a good plot, with honorable heroes/warriors. BUT! The story was to long with mostly alien political issues going on. I got bored and would have rather there been so action instead.

I wasn't really that annoyed with the heroine like everyone else. She had A LOT of change happening that was not explained to her. Once it was explained to her she immediately understood and came around. I've read other books where the Heroine still complained and bitched even after being told why. That is an annoying heroine. In this book she did not do this.

This book was way way way to long.

So it was just okay for me. I won't re-read/re-listen though. To boring

Difficult to complete reading book, not Celia /Erins best work. Recommend to save your credits.

I couldn’t finish it

I enjoyed the narrators voice and inflections but could not stand the authors writing. I stopped after the main characters eye color meant she was serene, what a load of BS. The character in no way showed serenity in her inward dialog or outward actions. I’ve seen other authors do this same thing and have never liked this trait: of outwardly saying the character is one way and writing none of those characteristics into the story, ridiculous. I love a good alien romance as much as the next girl but please, have some consistency.

Foul-mouthed heroine with no redeeming qualities

The heroine was thoroughly unlikable. Her main actions were swearing, shrieking, and crying. You have no idea why the hero was attracted to her. She has no special skills and does not seem to be very bright. For me this was a dnf. Probably should have returned it - but the reviews are so skewed in the book's favor, I was compelled to enter a counterpoint. The narrator is fine for this character and book.

I loved Joyce's attitude. Listening to her call out f*ck and the reaction of all warriors in hearing was just too funny . This book kept me smiling
and at times lol . It is well worth buying.