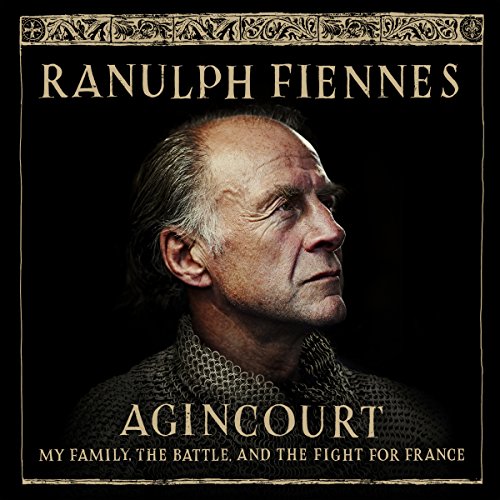 Sir Ranulph Fiennes' personal account of the Battle of Agincourt gives a unique view of one of the most significant turning points in English history.

Six hundred years after the Battle of Agincourt, Sir Ranulph Fiennes casts new light on this epic event that has resonated throughout British and French history.

On 25th October 1415, on a French hillside near the village of Agincourt, four men sheltered from the rain and prepared for battle. All four were English knights, ancestors of Sir Ranulph Fiennes, and part of the army of England's King Henry V. Across the valley, four sons of the French arm of the Fiennes family were confident that the Dauphin's army would win the day....

Ranulph Fiennes explains how his own ancestors were key players through the centuries of turbulent Anglo-French history that led up to Agincourt, and he uses his experience as expedition leader and soldier to give us a fresh perspective on one of the bloodiest periods of medieval history.

With fascinating detail on the battle plans, weaponry and human drama of Agincourt, this is a gripping evocation of a historical event integral to English identity.

What listeners say about Agincourt

A credit thrown away....

Honestly, I could not endure past the first chapter. The narrator repeated the phrase "my ancestors" in at least every second sentence.
The reading was so slow I had to set the speed to 1.6 in order to not fall a sleep between words. This was a credit I definitely would like to have spent on something better.

I wish this was my family tree

Thoroughly enjoyed it. It's so much more than Agincourt. From William the conqueror to Henry VI.

This could be a somewhat enjoyable piece of historic fiction purporting to be an actual historical work if not for one extremely annoying tendency of the author--self-aggrandizement. I would challenge you to play a drinking game by taking a shot everytime he uses the phrases "my kin" or "my kinsman," but I have no wish to send anyone to the hospital with alcohol poisoning. We get it, you claim to be descended from Norman nobility. Give it a rest.

My other complaint is that, for a book claiming to be primarily based on the battle of Agincourt, he spends an enormous amount of time distorting history leading up to the rule of Henry V, beginning his narrative before the Norman conquest, spending some time reciting dubious facts about Magna Carta, and going on about the suppression of the Anglo Saxons, which is largely a historic myth. I particularly had to roll my eyes at the recounting of the "facts" surrounding the murder of Edward II.

In summary, don't try to base any understanding of actual French/English history on this work, and listen to it only if you can tune out the author puffing himself up through his ancestry. The narrator is actually decent; although he does tend to make the "my kinsman" issue even worse by putting undue influence on "my" making it "MY kinsman."