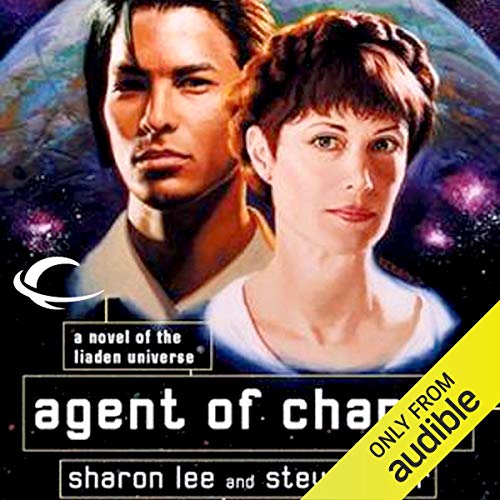 Fleeing the scene of his latest mission, Val Con yos'Phelium finds himself saving the life of ex-mercenary Miri Robertson, a young Tarren on the run from interplanetary assassins. Thrown together by circumstances, Val Con and Miri struggle to elude their enemies and stay alive without slaying each other - or surrendering to the unexpected passion that flares between them.

What listeners say about Agent of Change

I am glad I got though the first book narrated by Caplan because it seems to me that in book 2 he gets way better. Of course familiarity helps. But it seems to me Caplan find the voices that belong to the characters. Ie no more southern twang!
So I happily go forward to book three in the series.

Lots of good ideas in this space adventure, ensuring that I will read the next episode. I particularly enjoyed the "clutch" and their interactions with the two leading characters. Excellent narration.

At long last we have the Liadan stories on Audible

Among my favorite authors are Sharon Lee and Steve Miller. Their first three novels, Agent of Change, Conflict of Honors, and Carpe Diem were released in paperback form in the last 80s, which is when I purchased my copies. While other books have been placed and then removed from my bookshelves, these books have remained among my favorites. The characters are familiar friends and I always reconnect to them with pleasure.

After these novels were published, Lee and Miller were dropped by the Del Rey after they were asked to write books according to someone else' formula and they declined. It was a loss for their fans and their books fell out of print. Fortunately, Meisha Merlin picked up their catalog in the late 90s and started publishing new novels from them as well. Now, they are being published by Baen. As new readers pick up their novels, they need to realize that the writing is not consistent through their oeuvre, a fault that may be due to different editors. Consequently, I recommend that readers begin with the first three novels published and continue with the books in the order published instead of following the space opera's chronological order. Don't abandon the series because one or two novels aren't as good as the others. This is space opera at its finest and I highly recommend the series.

As for the audio versions, some of these novels were previously recorded and released as audiobooks. Of these, only one, Local Custom, was released by Audible. Now many of the older novels have be rerecorded as the new ones have been recorded and the sound quality is much better. The narrator Andy Caploe does deliver in terms of delivering some of the subtleties of Lee and Miller's writing style. The best narrators tell the story as if they are sitting around the kitchen table talking to you personally. Unfortunately, Andy Caploe delivers the narration in this novel with a slow weightiness that tends to weary and he doesn't do well with the women's' voices. Every word does not need to be treated as if it is the most important word in the world. And while he does a fairly good job with Val Con and Edger's voices, he fails completely with Miri's voice. She comes off not as a young, strong, smart woman, but as a whiny, old woman from New York who smokes and whose voice is lower than a mans. It is a complete miss in terms of representing her character.

Good Start to a Series

I love Lois McMaster Bujold's Vorkosigan books and was looking for more character-based space opera, and this did the trick. The action was fast, the dialogue fun and snappy, and the characters deep. Val Con's inner struggle was gut-wrenching, and the love story between him and Miri was one of the best I've seen in science fiction. I loved the comedy of manners aspect mixed with a strange world that felt vast and full of history, even though the book wasn't very long.

Narrator Andy Caploe did a good job, though the narration was a bit over-stressed at times. But I liked his Clutch Turtles!

One cannot even express the joy of finally having one's favorite series in audiobook form. I first read this book almost 25 years ago. Seriously - check out the original cover - LOVE the clutch turtle with Miri and Val Con. These books were so ahead of their time, Sci-fi with relationship/romance and adventure. You will not feel this is an older story - it's timeless and current. The authors do word play like no other, they can world build with such depth without overburdening the reader/listener with endless detail. In a few words, a paragraph you are sucked into a different world and you grieve at the end of each book. That is what I felt 25 years ago, waiting and waiting for this series to continue. Val Con and Miri are wonderful in this first story and they stay true to their characters with each book and yet grow and evolve, interweaving with the other stories protagonists. You CARE about them. I did have a little trouble at first with the narrator, he is good, but his voice was not what heard in my head as Val Con's. It's too deep. But he did well with Miri's tone, unlike many male narrators speaking as a women, he didn't try squeaky falsetto. I did resolve the difference, however, and ended up really enjoying the performance. He got Edger spot on. Grab these books and sit back and simply enjoy a wonderful ride like no other. Clutch turtles rule!! Long live Korval.

I should have known from the image that Agent of Change would read more like a romance novel than sci-fi. If I have to hear another time about his haunting green eyes or aching beauty I'll slit my wrists. If that's your thing you may like this book, but if I'd known there was a ship whose drive was an aphrodisiac and there'd be lines like the following, I wouldn't have purchased the book: "His SHIrt caressed CHEst and AAARMS with EVery MOOOVE as he deLIGHTedly slid his PAlms down LEATHered THighs."

I have to agree with others on the narration problems. Looking at some other random samples of Andy Caploe's narration seem to have the same problem. He puts strange pauses in the reading and emphasizes unusual words or syllables making it seem melodramatic, almost like a caricature of Captain Kirk but more annoying. Listen to the free excerpt and sample to see if it annoys you. "The MAN who was NOT Terrence oGRAdy". I hadn't really noticed it in the sample and it didn't bother me much at first, but after hours of listening it annoyed me to no end. I could see using it as a way to distinguish characters through their dialogue, but it doesn't belong in the narration. Most of the characters are okay, but I thought Miri and Watcher's voices were poor fits. I'll not be getting another book read by him if I can help it, but maybe it won't bother you as much.

Finally I'd like to note a similarity to Twilight. I hadn't noticed in Twilight until it was pointed out, but it probably isn't good to have tweens reading romantic fiction glorifying an abusive relationship. Like Twilight, Agent of Change has a female protagonist falling for a dangerous man-child whose nature it is to kill and whose every instinct tells them to kill her, but she is able to change him into a more sensitive, caring person through her love and by sticking by him even though it puts her in danger. I've seen this mentality where it isn't really the abuser's fault and they're sorry but they just can't help themselves and it isn't right and shouldn't be idealized.

As for the story, I'd give the plot a three but the writing a one so I averaged to a two.

Let me start by saying I am a huge fan of the Liaden Stories and have been since the 80s. I have read them all multiple times and wait with baited breath of the next book in the Balance of Trade arc. Having said that --- Andy Caploe's female voices drive me batty. They are all breathy and whiny and ugh. Miri is not breathy - she is mercenary Sargent for the sake of the first egg. And all of his minor female characters sound the same.

I am going to get Carpe Diem and see if it gets better. If not I don't know if I will buy the others in this arc that he reads which is really sad.

Space Opera I couldn't put down!

What did you love best about Agent of Change?

I've enjoyed the Liaden Universe and Miri and ValCon are amongst my favorite characters. This story tells how they met -- didn't like each other much at first, but learned how to get along. While it isn't the first chronologically, it's a good place to start in the series.I like how they slowly learn about each other and work together to solve the problems they each face. Of course not everything gets resolved and you must "tune in next time" for more!

My favorite character would be Miri because of her change from not wanting to rely on anyone else to accepting a partner.

Like others, his personification of Miri was very distracting. Though I did get used to it, I always found it slightly annoying. I loved how he did Edger!

not the best, but certainly worth a listen if you are looking for some lighter listening with interesting characters, dialogue and action. I am interested enough to buy more in the series.

narration is the problem here

The books - yes. Not these audio versions - the narrator pretty much destroyed the charm of the series.

Edger. Powerful and potentially lethal but wise and peaceful.

Same problem as with the 1st book in the series - all "his"women sound either simpering or peevish. He is the worst narrator so far (in my experience) concerning female personages.

Also he obviously does not pay attention to the text itself - so somewhere in the book somebody says something "gently" but the narrator totally disregards such hints and the phrase comes out as rude or forceful.

Did Agent of Change inspire you to do anything?

See if there are more Leaden books narrated by somebody else.

Not buying anything else by this narrator.

This story is basically two super agents out in the big wide world of classic sci-fi. They get into trouble and are hunted throughout the book and on into the next. There isn't anything particularly bad about it and there's nothing particularly good either. If I had to sum it up in one word it would be "unremarkable." The characters are pretty flat and cliche. The sci-fi tech is very mundane and uninspired. Most of the time they are getting ambushed and effortlessly defeating mindless flunkies. There's no main villain, just an endless supply of throw-away thugs. There are a few good characters in the turtles but, unfortunately, they are not the protagonists. It's a decent time-passer but I'm probably not interested enough to continue in the series.

Enjoyed it so much I got the next one

Would you listen to Agent of Change again? Why?

A masterful saga sweeping over the vast expance of space, Loved the story line which brought to life complex and interesting characters, couldnt wait to get the next in the series