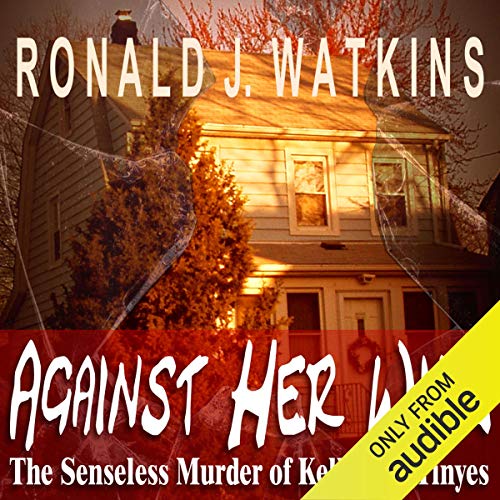 Richard and Victoria Tinyes feared the worst when their thirteen year old daughter Kelly Ann vanished from their quiet suburban community of Valley Stream, New York, on March 3, 1999. But the nightmare to come was worse than they could ever imagine. Only five doors away, in the home of John and Elizabeth Golub, police found Kelly Ann's body stuffed in a plastic garbage bag. She'd been brutally beaten, stabbed, strangled, and mutilated. After weeks of intense investigation, police arrested the Golubs twenty-one-year-old son, Robert - a reclusive young man obsessed with bodybuilding and given to fits of rage. The sensational trial and subsequent conviction of Robert Golub shocked the nation and tore the once peaceful community apart. Neighbors took sides. So did the media. And no one who lived on Horton Road would ever be the same.

Note on audio book: Except for the beginning and end of the book, there is no longer any music.

What listeners say about Against Her Will

This story held me from the start! great murder story with great charactors! i recommend to anyone who loves a mistory with told in fantastic details!


This story had me riveted to the speakers! I don't know if this young killer actually thought he'd get away with murder...perhaps because the body *was* well hidden from view in the messy basement of what we call a "hoarder house" (jammed with STUFF) ? Who knows!

Not only was the crime itself quite horrendous, but the fact that the victim AND the killer lived on the SAME little neighborhood street, where everybody knows everybody, and just a few houses apart, made for QUITE the sub story! The hatred between the families that developed as the result of this murder, made daily life for everyone involved a living nightmare.

Even during the trial, the families, friends and neighbors couldn't refrain from constant outbursts of anger and threats towards each other. Obviously the victims family wanted the killers family to just leave their house, move far away and get out of their lives (and sight) forever - but they refused, believing their son was innocent. So the back and forth harassments went on and on. What a story! Held my attention every step of the way...even the trial portion. This was a great book! I will listen to this one again, yes indeed.

I really liked this narrator a LOT. His pitch and tone were perfectly matched for this case. Bravo!

No. It had a habit of constantly repeating the same things over and over and over. It could have been much better written. I felt the author concentrated more on the animosity between the two families than on the crime, victim and investigation.

Would you listen to Against Her Will again? Why?

OH yes I will, I could not get enough. I am passionate about true stores and this one ranks right up there with the best.

Yes it did, I guess there always has to be a first victim, but why her? Why did he do what he did? Was it the steroids. I have read about steroid concerns prior.

The whole book was good

For a while I felt for the family and was extremely frustrated with how the family was treated by the neighbors. If I really think about it though, i would probably act the same way if my baby had been killed.

Where does Against Her Will rank among all the audiobooks you’ve listened to so far?

Against Her Will is one of the best true crime books I've purchased on Audible.com

My favorite character was actually Kelly, though we hardly hear her voice.

The naming of the suspect by the cops.

Deep sadness for a senseless act committed by a psychopath.

Highly recommend this book. The narrator's reading style and voice are PERFECT for this particular book. I applaud the author on his excellent choice of narrator.

True re story about a young girls murder or should I say vicious butchery... I normally like true crimes but this one was too detail oriented for me and the narrator did not capture my attention

A horrible true crime story, This audiobook describes in detail the events before and after the killing of Kelli Ann Tinyes. This book gathers details from the victim's family, the accused, and the friends of Kelli Ann. I would say that it is told from the police perspective. The story held my listening attention. The narrator Greg Lutz is crisp and precise.

Horrific murder, was frustrating towards the end

This was an account of an unspeakable crime, the savage butchery of a 13 year old girl. It was also the story of two neighborhood families bitterly pitted against each other, themselves ending up in court. The book relied heavily on DNA and circumstantial evidence, and the court trial of the offender. That’s because the perp confessed nothing, said he knew nothing and didn’t do it. I found that quite frustrating. Narration was just okay. Still, I’d recommend this one.

Living on Long Island now at the time of the murder, I had heard of the case but knew little about it. This tells the story in all it's sad detail. Suspenseful and frightening, it keeps you on the edge of your seat. The people in neighborhood where the crime occurred and even the victim's family are not presented in a flattering light. You will find out what happened, but not how or why.
The narrator is very good, though no one bothered to instruct him on how to pronounce "Mineola" or "Nassau."

This unfortunately tragic and true story slices the soul. It is gripping and powerful. This book will stay on your mind long after it has been read to you. The narrator is excellent in his tonality.

Very graphic story of the brutal murder of a young girl, and the devastation left behind for all involved. One of the most thorough true crime books I have read, and I have read many. No happiness here, but amazing interaction of personalities. Highly recommended.