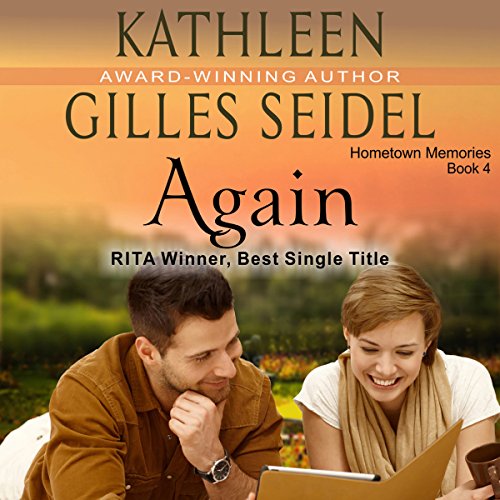 Head writer for daytime's only historical romantic soap opera, small-town girl Jenny Cotton is on top of the world. But she can't seem to write herself out of a difficult relationship until actor Alec Cameron walks onto the set.

Alec survived a big-budget TV flop with the same "good guy" courage that got him out of a failed marriage. But no matter how hard he tries, he can't seem to hide his wounds from writer Jenny.

Now the script flowing from Jenny's pen and unfolding every weekday afternoon to millions of eager fans is more than just a story...it's his story, which is quickly becoming their story. But Jenny doesn't want to be rescued by a "good guy" white knight any more than Alec wants to fall in love with Jenny.

What listeners say about Again

Fun with just enough angst to be interesting.

I just discovered this author this week and frankly selected this book because it was included with my new audible membership. The story was well developed as were the characters. I understood why the characters acted as they did without unnecessarily prolonged back stories. This book offers a heroine and hero I can root for that were likable but flawed enough to be interesting. I loved the happy ever after ending and will be seeking more books by this author.


Although I rarely have watched TV soaps, I found the details about the process of making soaps fascinating. The characters were mostly well-drawn, including the minor characters. Jenny Cotton is the head writer and developer of a half-hour soap set in Regency England. Alec Cameron is a former soap star whose career tanked after he was blamed for the failure of a major soap. When Jenny casts him on My Lady's Chamber, he is very attracted to her. Another new hire, a sexy young woman, suddenly marries Jenny's long-time boyfriend. Seidel's deft writing keeps this soap opera-ish plot fresh and interesting. The story is engaging. The narration is mostly fine with the text but it becomes cringeworthy when she attempts the dialogue the actors say in what is supposed to be a TV show set in Regency England. Sometimes it sounds more like Gone With the Wind than Pride and Prejudice.

a A Good Listen!

I enjoyed this book period as always the author writes very detailed stories and intricate details throughout the characters.