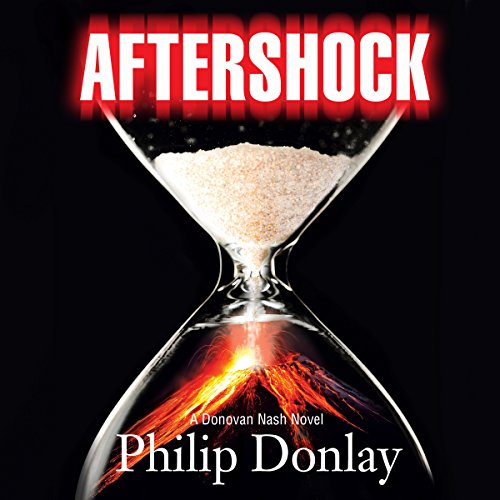 By: Philip Donlay
Narrated by: Ward Paxton
Try for £0.00

The flames of Donovan Nash's worst nightmare are fanned to life when Stephanie VanGelder, one of those closest to him, is kidnapped in the volcanic powder keg of a lawless Guatemala. With help from his inner circle that includes his estranged wife, Dr. Lauren McKenna, Donovan races headlong into the world of corruption and deception. Battling the kidnappers, as well as the deadly gas and lava from the impending eruption of a volcano, Donovan only has one chance to save Stephanie.

Amid earthquakes, volcanic ash, and lava from the eruption, the rescue goes horribly wrong, and Donovan is forced to find a way for everyone, including a mysterious woman who holds the secrets to his past, to escape one of the most powerful forces on Earth.

Aftershock is the story of Donovan Nash, a man battling his torturous past, while struggling to survive the volcano along with those who matter most to him. In the face of impending death, Donovan must garner the courage to endure a shocking revelation he's sought for decades - a truth that will change him forever.

What listeners say about Aftershock

There is much to like about Aftershock. It is a good suspense story. But narration is disappointing and the novel unnecessarily drags on and on; it's too wordy and to slow getting to the point.

It’s almost as if the narrator native language is not English. There are ridiculous pauses in the middle of words and sentences. This by far is the worst narration I have ever heard, it ruined the story!!

I had to quit listening to the unnatural cadence. I can't even tell what the details of the story were because of the weird word delivery.

This series is very good. Action, detailed, story is easy to follow. The narration needs much work. The Hankry way he does the characters is annoying. After a while they all sound alike, then he goes back to different voices. Phillip Donley does a great job of telling a story though. Some things you think you have figured out but he adds a surprise twist you didn’t expect.

A computer generated voice would be less frustrating. I wondered if English might be the reader's second language.

Tension tears, remarkable control over plot and a more than satisfying conclusion. This is my first Philip Donlay novel, but I'm hunting for more!

It was a struggle to fish this book for two reasons. one was the poor narration and the other was the too much repetition of Donovan's past. the first two books in this series were interesting but I won't be listening to any more.

I love mysteries that take me away to exotic places with people who deal with an injustice.
This story and narrator deliver both.