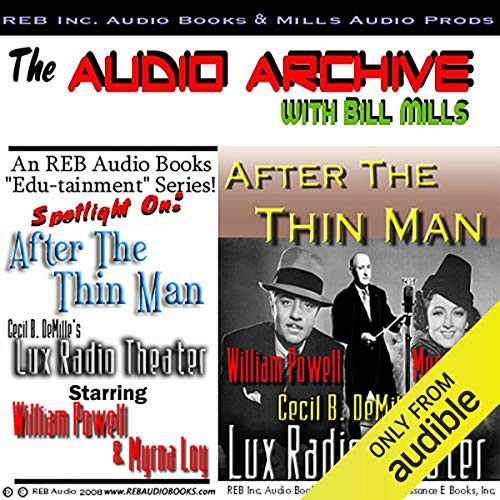 After the Thin Man

After the Thin Man combines crime, kisses, and cocktails in the second Thin Man adventure! Here is the classic Lux Radio Theater performance of the 1936 movie hit After the Thin Man, recreated in 1940 as a 60-minute radio adaptation with the original film stars!

This Audio Archive presentation features William Powell and Myrna Loy, who reprise their original roles as newly retired detective Nick Charles and his beautiful (and wealthy) bride, Nora. The newlyweds take the Sunset Limited train from New York back to San Francisco, just in time for New Year's Eve...and just in time for a murder among Nora's very own Nob Hill family.

Nick continues insisting that he's out of the "detective racket". But one murder leads to another, and soon the two tipsy sleuths are up to their Nob-by knees in mahem and mystery.

William Powell was a three-time Academy Award-nominated American actor, noted for his sophisticated, cynical film roles. Myrna Loy was a big box-office draw, and in 1936 was named Queen of the Movies (with Clark Gable as the King) in a nationwide poll of movie goers.

What listeners say about After the Thin Man

What made the experience of listening to After the Thin Man the most enjoyable?

The book is in different voices and really funny. It fits real life!

The way the husben speaks to his wife. There is sarcasm and true love. And the wife is the same way as the husben.

the whole book moved me

Would you listen to After the Thin Man again? Why?

Oh, yes. I like the movies and I think it's William Powell and Myrna Loy that make them because the stories themselves are just ok.

I enjoyed that this radio broadcast had at least the main characters from the movies. It made it familiar and fun. The old advertisements were pretty fun too.

Yes. The whole broadcast was only about one hour

I downloaded this to listen to with my mother on a cruise. It didn't disappoint. If you enjoy the smart (or smarty) comedies of the 30s/40s then you'll probably like this too.