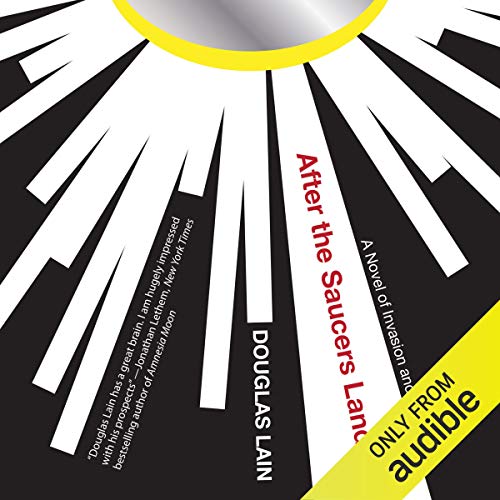 After the Saucers Landed

The bastard offspring of They Live and The Day the Earth Stood Still, as told by Jean Paul Sartre.

Shape-changing aliens may have landed on the White House lawn and subsequently integrated into human society, but humanity is still full of self-centered and self-absorbed individuals. Laura's just scraping by on her art teacher's salary. Donald, a best-selling author and UFOlogist who provided counseling to abductees, has tried to distance himself from the saucer landings and is looking to move on with his life. But everything changes when Shelly, an alien enrolled in Laura's art class, mysteriously switches places with Laura. Life begins to unravel. Laura then realizes this isn't the first time Shelly has moved into another person's body, and fragments of other people's memories have jumped with her, including those of Donald's wife. Laura begins to grasp that reality, or at least humanity's perception of it, may be more flexible than anyone wants to admit. And though she can't explain how or why, she suspects the aliens are behind it and will need Donald's help to stop them.

In an egocentric society that sleepwalks through the rituals of daily life, would people even notice if the world around them suddenly and inexplicably changes? Part Jonathan Lethem (Amnesia Moon) and part Kurt Vonnegut (Slaughterhouse Five), Douglas Lain's latest novel uses science fiction's alien invasion rubric to examine and undermine the world we take for granted. This deeply unsettling satire places him alongside contemporaries like Jeff VanderMeer and Charles Yu as one of his generation's most exciting and challenging speculative fiction voices.

What listeners say about After the Saucers Landed

Douglas Lain's books are always fun and quirky, unlike most you'll ever encounter. It examines questions facing modern society in a thoughtful manner. I find the ratings strange since it is intellectually stimulating, perhaps this explains why it has so many different ratings. It is possibly one of the most brilliant SF books in the past decade. Highly recommended.

Falls flat instead of a sticking the landing

Douglas Lain's After the Saucers Landed falls short in its satirical attempt to capture an alternate recent past that is so self absorbed and hyperconsumer-ized that aliens result in merely eye rolling. Told from the perspective of a literature professor and former UFOlogist, the landing of the aliens sorta upsets the whole UFO shtick that had been going. From their perspective, they've been coming Earth regularly and always finding human wanting. What the offer is a new age of Aquarius sort of experience.

The tale rambles with strange goings on that are never fully explained with some humans being 'raptured' or abducted while doppelgangers take their place and sometimes at the same time. The aliens want to help but like a therapist, rather than a offering something new or astounding. There are much philosophical musings that are on the level of undergraduate drug induced haze, rather than insightful commentary.

While the main character is male, a female narrator makes for a disjointed listening experience.