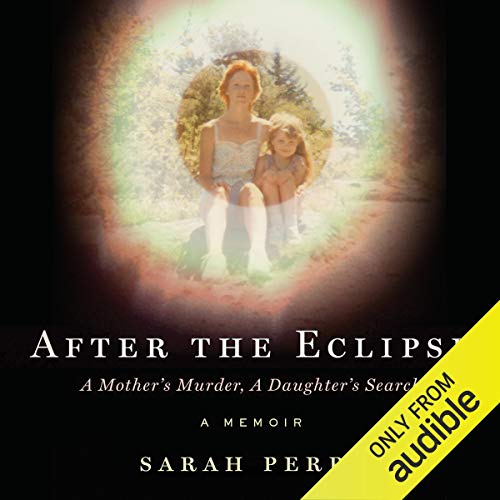 By: Sarah Perry
Narrated by: Emily Woo Zeller
Try for £0.00

A fierce memoir of a mother's murder, a daughter's coming of age in the wake of immense loss and her mission to know the woman who gave her life.

When Sarah Perry was 12, she saw a partial eclipse of the sun, an event she took as a sign of good fortune for her and her mother, Crystal. But that brief moment of darkness ultimately foreshadowed a much larger one: two days later Crystal was murdered in their home in rural Maine, just a few feet from Sarah's bedroom.

The killer escaped unseen; it would take the police 12 years to find him, time in which Sarah grew into adulthood, struggling with abandonment, police interrogations, and the effort of rebuilding her life when so much had been lost. Through it all she would dream of the eventual trial, a conviction - all her questions finally answered. But after the trial, Sarah's questions only grew.

She wanted to understand her mother's life, not just her final hours, and so she began a personal investigation, one that drew her back to Maine, taking her deep into the abiding darkness of a small American town.

Told in searing prose, After the Eclipse is a luminous memoir of uncomfortable truth and terrible beauty, an exquisite memorial for a mother stolen from her daughter and a blazingly successful attempt to cast light on her life once more.

"What strikes me so strongly about this excellent memoir is that - considering the subject matter - the writer was able to organize it at all. It's sometimes disarmingly astute, and what it says about the ties that bind, at the same moment they sometimes get stretched way beyond capacity, elaborates not just this singular drama, but provides a painful, and wincingly real, statement about class in America." (Ann Beattie, award-winning author of The State We're in: Maine Stories, The New Yorker Stories, and more)
"After the Eclipse, Perry's beautifully wrought account of her mother's murder, is a profoundly important book. In this gripping tale of the search for the killer, Perry examines the issues her mother faced in her brief life: poverty, the search for home and, most importantly, the deadly and all-too-common issue of violence against women. Part memoir, part true crime, Eclipse is a clear-eyed, captivating portrait of a life cut short. With this book, Perry writes her mother back into the world." (Alison Smith, author of Name All the Animals)
"Sarah Perry's book is smooth, beautiful and breathtaking. I can't quite get over it - her mastery of the language, the narrative, and the landscape of the devastated heart." (Roxana Robinson, author of Cost and Sparta)

What listeners say about After the Eclipse

Beautifully written, story will stay with you

Really moving, well-written, gripping, heartbreaking but powerful. The story will stay with you for a long time.

Sarah was so young to see what she did, lose what she did and was let down by so many...and yet, she made it....a life story that makes you want to reach out and hug her....an amazing and courageous young lady.