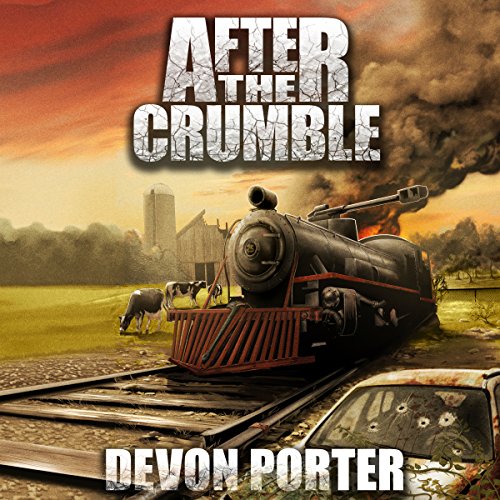 After the Crumble, Volume 1

Our future has crumbled. In the late 2020s, the grid finally flickered out for the last time, succumbing to attacks from a newly formed Resistance, fuel scarcity, and general entropy. It is now the year 2037 and many have died, with the few that managed to escape death solely concerned with their daily survival. Gavin Collier is one of those lucky few, but survival alone isn't enough for him anymore. Recognizing that the meaning of life didn't crumble along with the rest of the world, he embarks on a dangerous and personal journey for reasons that few can understand. After leaving his home for the first time in years, Gavin must commit murder in order to save his life, only surviving through good luck and sheer force of will. The series of events that follow will alter Gavin's life forever. He finds true love for the first time, and when his love makes the journey to join Gavin at his family farm, the violence and evil of the outside world follows her there. Renewed by hope and the power of love, Gavin will do whatever it takes to protect his future wife and the remaining members of his beloved family, as the dangerous forces close in on his cherished farm and small community. Gavin's family had been surviving with little help from the outside world, but now they must come together with their neighbors to fight for their land and those they love. Personalities clash, lives are lost, and fear is inescapable. They all must struggle to keep their humanity in this new, brutal world. Gavin knows that they must prevail at all costs, and keep the flames of freedom and faith burning during one of humanity's darkest times. Doing so is the only way to make life worth living, and worth something more than just survival.

What listeners say about After the Crumble, Volume 1

Listening to every sample from now on!!!

His style of fast reading with hardly any pauses really took away from the book. No performance what's so ever.

I love post apocalyptic books and have listened to a bunch. I don't know what it was exactly but it just didn't seem very good. Maybe it was the fact that this guy risked his life for a small dog or that this old man hooks up with this twenty something year old women. I also didn't care for how they kept saying the machine. Also the narrator made this very hard to listen to. All to often the story hinges on the reading style of the narrator. If you can't get into it and the reading style bugs you, really enjoying the story is basically impossible in my opinion.

The narrator! No distinguishing between voices, even between sexes. Not quite monotone, but close enough. The most disturbing thing that makes me want to stick an ice pick in my ear is the lack of audio editing!!! Did anyone even listen to this think before it was put out. This is the digital age. When the narrator misses something, you should at least go back and re-record it. I'm sure I would have enjoyed the story more and perhaps given it higher ratings if it just wasn't so mind numbing to listen to the narrator.

Life as we knew it has crumbled out of existence – the wealthy took over the world, driving the prices and controlling oil and fuel to the point that there was none left. The rebels fought the “machine” and ended the reign of the wealthy after making sure the grid flickered out permanently in 2020.

In 2037, the grid has been off 17 years and their survival has been hard. People had to learn how to farm, build, hunt and create ways to harvest food and water safely. As with any world that has fallen apart, there are bandits of evil people roaming around hoping to steal and kill for what they want.

Gavin, a survivor who lives on the family farm has decided to leave and go on a personal mission that many feel is frivolous and deadly. Although he was almost killed he did find his true loves – and life became nearly perfect. Others are itching to leave as well, to discover life outside and meet their own personal needs – few do it however. Surviving is not enough anymore – human nature of exploring, learning and discovery is taking hold again.

It becomes evident that Gavin’s family and their nearby neighbors need to pull together and provide aid to one another to keep the bandits at bay. Lots of action and thought provoking ideas are introduced such as The God Spark.

The plot was well developed as was the characters. I wanted to hear more about The God Spark and the journey taken by Mike. The bad guys that were met and conquered were sufficiently portrayed as evil and died appropriately and adequately.

I enjoyed this book – no zombies, monsters or threatening disease bringing the world to its knees; just human nature and greed. That is truly horrifying because it could happen!

The narrator, Gabriel Zacchai did a good job of reading the book – there were no voices, just reading. He injected the right amount of energy and excitement when appropriate, there were a couple of times where he tripped over the words – they were coming out faster than he could talk but that added to the excitement of the story – it made it clear that something was going on.

I had no issues with the production, everything was clearly well done.

this author is using this book to promote his own left-wing agenda. anti Corporation anti oil. I read a lot of post-apocalyptic dystopian novels. This is got to be the worst one ever.

I had a hard time getting through this audiobook. Firstly, the narration is poor. No life or characterization at all and significant lack of cadence and even some mild stuttering. Secondly, the whole story is filled with douchebag bs that I'd expect to hear from a table full of greenie hipsters. There's just so much talk about the benefits of weed and how to get over the middle-class class white guy guilt. Seriously. And I can't even begin to comment on the "druidic stuff" (you have to get the book to understand this). It seems that the author believes he's an expert on everything that is 'killing our world' and that anyone who doesn't follow his train of thought is unencumbered with any sort of decency or sense. Conspiracy issues and sad attempts at connecting events during every part of the story. In essence, 5 minutes of bullshit is ruining the ajoining hour of story for me. I thought "Patriots" was the epitome of a story wrapped in preachy drivel, but "The Crumble" has way surpassed it. The idea of a slow collapse is good, but the delivery is a fail as it is just a sad attempt after some sort of indoctrination.

Great story. Not so great narration

I really liked the story. I got frustrated by the narrator. I will be getting the second book when it is released but I hope that there is a different narrator.

I can say that listening to this book wasn't time ill-spent. He has some of his characters give Ayn Rand-like speeches, though not as long. Some of these speeches were full of unnproven assertions presented as facts. He used an interesting literary device; the protagonist, Gavin, had kept a journal during the time leading up to the Crumble. Occasionally, we would hear an excerpt. One problem, though, occurred whenever the journal would refer to a future event; for example, a journal entry from July 2009 referred to "the first time" quantitative easing was used. The story itself is good.

I enjoyed listening to his voice. He could have used more rehearsal time. He would run out breath, have to swallow in the middle of sentence, and sometime put the emPHAsis on the wrong word. When one of the characters, Mike, was making a wedding toast/speech, the narrator said Mike "had developed a loud, deep squeaking voice." I had the sense he was sight reading the manuscript.

You put religious views in the story that are not mainstream. Needs alot more research