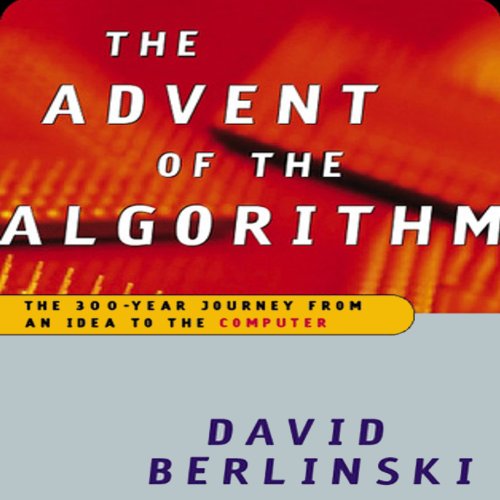 Advent of the Algorithm

The Idea that Rules the World
By: David Berlinski
Narrated by: Dennis Holland
Length: 10 hrs and 42 mins
Categories: History, World
1 out of 5 stars 1.0 (1 rating)

Advent of the Algorithm

There is very little that we do these days that doesn't involve computers, the cloud, or some other hard-to-understand technology. And, of course, all that is made possible by the even-more-complex concept of algorithms. In The Advent of the Algorithm, philosopher and author David Berlinksi takes an in-depth look at the philosophies and sciences that led to the development of one of the central forces behind virtually everything we do on the computer. Told in a smart yet easy-to-follow manner, with an engaging performance from Audible veteran Dennis Holland, this is a must-listen for anyone interested in the complex science behind some of our most basic, everyday habits.

Simply put, an algorithm is a set of instructions-it's the code that makes computers run. A basic idea that proved elusive for hundreds of years and bent the minds of the greatest thinkers in the world, the algorithm is what made the modern world possible. Without the algorithm, there would have been no computer, no Internet, no virtual reality, no e-mail, or any other technological advance that we rely on every day.

In The Advent of the Algorithm, David Berlinski combines science, history, and math to explain and explore the intriguing story of how the algorithm was finally discovered by a succession of mathematicians and logicians, and how this paved the way for the digital age. Beginning with Leibniz and culminating in the middle of the twentieth century with the groundbreaking work of Gdel and Turing, The Advent of the Algorithm is an epic tale told with clarity and imaginative brilliance.

Self indulgent, slow and hackneyed info-tainment.

Because Berlininsky can't be troubled to come up with original metaphors from one book to another, I feel no reservation at all to copy and paiste this review from another book of his. They seem to fit all of his works very well

As if David Berlinski hid 6 pages of information at random intervals within a thesaurus, "The advent of the algorithm" closely resembles a sophomore's expository writing assignment that desperately pads his under researched book with monotone landscapes and irrelevant details, in what only can be described as a half hearted attempt to fill the required number of pages.

Every chapter is a tedious forest of recycled clichés and tired metaphors lifted directly from his other books. Lacking all restraint, he launches himself shamelessly into excruciatingly long accounts of the furniture, the shape and size of professor's heads, the bridges in Prague, the gestures and emotions of people not present to hear his arguments, and the smells that may or may not have filled the rooms of various historical figures. "They shine like diamonds on a jeweler's black velvet cloth" to quote Berlinski from both "A Tour of Calculus" and "The Advent of the Algorithm"

I blame both the author and the editor for this extravagant waist of print space and my time.