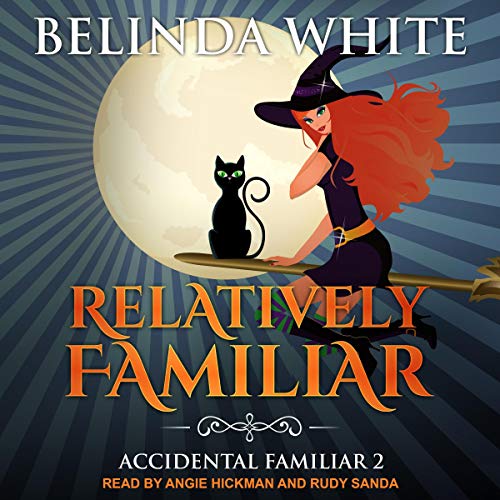 By: Belinda White
Narrated by: Angie Hickman,Rudy Sanda
Try for £0.00

A man is innocent until proven guilty. Why isn't that true for witches and their familiars too?

Arc kept his end of our bargain and helped me with my family's problem. Now it was time to return the favor.

He's been on the run ever since waking up next to his dead on again/off again girlfriend. He swears he didn't kill her. I believe him.

He also says she wasn't in his bed when he went to sleep. That's a harder pill to swallow. Arc is a very powerful witch in his own right. And from what I've seen, when he sets a ward, it sticks. So how did the killer not only get through his wards, but plant poor Sonya's body right next to him without him knowing it?

If that's the way it really went down, then some top-level witches must be involved. Possibly even council witches. The very thought scares the crap out of me. Council witches are scary. I should know. My aunt Opal is one of them. And, yes, she scares me too. On pretty much a daily basis.

Unfortunately, that isn't where the bad news ended. Arc and I had another shock in store for us when we reached out to his family for help. This one would change our lives forever.

After listening to Book 1, I was interested enough to try Book 2. I’m glad that I did. Now I must listen to Book 3 to discover the answers that were left hanging in Book 2. These stories seem to have a way of drawing you in, making you hesitant to tear yourself away. Amie’s character is developing quickly & even she doesn’t really understand her newly found powers of magic. She is relying on her family to explain the changes she is undergoing & how to manage it all. I’ve already ordered Book 3.

Still having fun listening to the series. I'm not bad at predicting who does what in a story. Hmmm. I wasn't astonished at the bad guy, he was on my list of suspects. I do like that the author reached a HEA conclusion.

I like Angie Hickman's narration. I was slightly less enamored with the male narrator, the voice was just not what I pictured for Arc. And that is just a personal preference.

This was a rather light listen with only a bit of quickly relieved anxiety and of course the amoral nasty persons nicely dealt with. Still a good cozy mystery. I am counting on some clarification in the next installment.