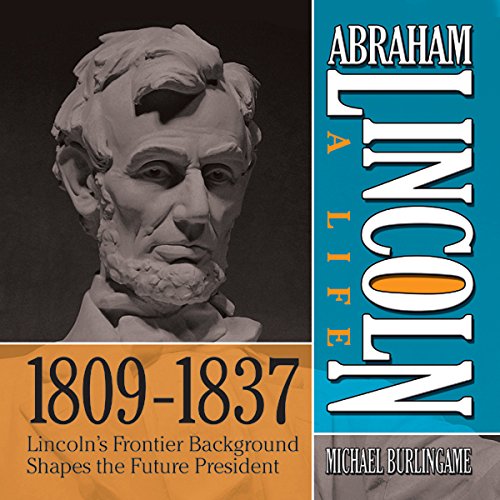 Lincoln's Frontier Background Shapes the Future President (1809-1837)
"I have seen a good deal of the backside of this world."
In Chapter 1, we are introduced to Lincoln's lineage and the history of his grandparents, his parents and the various locations in which they settled. But this chapter is mainly devoted to Lincoln's father Thomas, recounting many of his ventures, personality traits and the intricacies of his relationship with his son. We also learn of his son's childhood experiences, mainly those in his first seven years, which helped shape Lincoln into the man he becomes.

"I used to be a slave" - Boyhood and Adolescence in Indiana
This chapter begins with an account of the Lincoln family's difficult move to Indiana and the intense labor it took to build a home there. The Indiana years were marked by the death of Lincoln's mother and the introduction of Lincoln's stepmother, the woman who cultivated his interests and encouraged his education. We get a clear understanding of the role that learning and education played in his life, his developing personality, work ethic and religious views.

"Separated from his father, he studied English Grammar" - New Salem (1831-1834)
Chapter 3 begins with a description of the business ventures that Lincoln participated in and leads to several anecdotes which give us a clear idea of the character and personality of the future president. We get a true understanding of his years in New Salem and his experiences there as he progresses from store clerk, to soldier, frontier merchant, surveyor, postmaster, political personality and on to the state legislature.

"A Napoleon of astuteness and political finesse" - Frontier Legislature (1834-1837)
This chapter goes further into Lincoln's law studies and political career as a legislator and outlines the ideologies that shape his presidency. We also learn of his relationship with Ann Rutledge, whose passing leads him into a severe depression.

"The most meticulously researched Lincoln biography ever written. Burlingame's Lincoln comes alive as the author unfolds vast amounts of new research while breathing new life into familiar stories. It is the essential title for the bicentennial." ( Publishers Weekly)
"The book need not be heard in one sitting. Each part stands alone." ( Publishers Weekly)
"...profound and masterful portrait." (Doris Kearns Goodwin)

What listeners say about Abraham Lincoln

I am really liking this biography. For me it gives a clearer understanding of who Abraham Lincoln really was.

He was born really, really poor, and lived that way for most of his childhood. I really had no idea. His father discouraged his studies and actually tried to interfere. His mother fixed him up in a kind of dress and a bonnet for his first day of school.

Aside from all that, Lincoln clearly was a man apart. He would have to be to rise above this miserable environment. But he read his books, was honest, a peace maker and was one of the finest ever examples or rising above one's circumstances.

The author is very good at laying this out and I am looking forward to listening to the rest of the series.