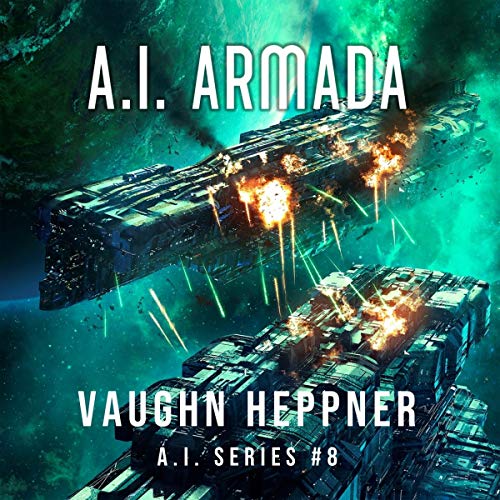 By: Vaughn Heppner
Narrated by: Scott Aiello
Try for £0.00

Years ago, Main 54s brain-core had to flee his exploding planet-sized warship because of the treachery of Jon Hawkins. Later, Main 54 gained special processors, a new warship - something changed in him...greater clarity of purpose and superior combat skills.

He has been taking over the AI Dominion around here ever since. Now, his brilliant calculations reveal it is time to destroy the Confederation with a super fleet.

Jon is on a desperate mission in the void seeking clues for making the alien Subspace Teleport Device work. But even if he succeeds, the Confederation will need the courage of the Warrior Roke, the genius of the Sacerdotes, the cunning of the Sisters of Enoy and the power of the Kames to survive the approaching holocaust.

This will be the war to end all wars or final annihilation.

A.I. Armada is the eighth book in the series chronicling humanity’s grim war for survival against the galactic machine juggernaut

The series starts with book one, A.I. Destroyer.

What listeners say about A.I. Armada

A fairish blend of fantasy & sci-fi.

I really have mixed feelings about this one because I am still devastated that they switched narrators mid series. Although Scott Aiello did a better job than last time he’s no Marc Vietor and honestly, he’s just not right for this type of book. I’m not sure what the producers were thinking but the performance is not good enough to support what is otherwise a really solid story by Heppner.

Narrator was better but still not great!

Although the narrator was better performing this book than the last, he was no where near as good as the previous narrator. At least in this book Bask didn't sound like a version of Arnold Swarzanegger from a bad Saturday Night Live skit.

The book had very good potential but it felt rushed and not sure if the series is finished or not.

I was a bit disturbed at the change or narration! Scott Aiello is great! But to switch narrators in the last 2 books of the series was not good! Scott did a great job for what he was thrown into but when you are used to a certain voice for a certain character, its hard to transition. Love Vaughn Heppners books and guessing the narration switch was probably out of his hands... Guessing this is the end of the series! Don't know how i feel about the ending, did seem a bit rushed!

I feel like this is written as a quick way to finish out the Ceres. The storyline was dry the action was fast and short lived. The plotline was extremely fractured. I loved all the preceding books except for this one.

story became boring and I lost interest shortly after the first handfull of chapters, and found myself already browsing for my next series to start. it's not like the story is bad, but from the first book, with storming through the first cyber ship and then the battle station, fearing for not only your own life but humanities existence from the merciless and unfeeling A.I.'s "AI dominion" , that wants to take control of your mind, by turning you into a cyborg with a wifi router in your brain and all the machines have to do is say "hey Google" and they can make you try to kill those you love with your bare hands... or just 'SPLODE! It really was a much more dark, gutteral, and much, much more grim outlook, but also just wanting to smash the machines into pieces with your bare hands and FIGHT NO MATTER WHAT! To instead it's just turned into constant corny interpersonal drama plus the void elves or whatever, and oh yeah the StarLordd, hey zues the space man or whatever is like a god or something and you just close your eyes and ask him to "please let us win this fight" honestly? I'd much rather have a bland boring 1 dimensional bumbling yet charming, brash and even lethal, but yet really has a good heart" - hero, at least he's consistent... I was ready for a bloody and brutal fight for survival into a soap opera... not to mention The first narrator set the tone so switching at the tail end of a series is definitely a big deal, it feels more like a ghostwriter takes over the last 2 and a half books and added some mystically and magically bad ass flame and lightning elementals, also kinda like void elves in space,and some kinda weird "energy couplings" that offended their overtly vain, narcissistic, and neurotic sensibilities, so badly that some super old, nobility-or-royalty, but also a secret society, in control of but not really, a whole entire dimension/plane of existence/ hyper reality 5th - 16th dimension bubble universe and apparently gods, demons, lightning and flame elemental void elves, glowing green goo from that one planet dude and then something really REALLY whatever the #@$* <------ all that stuff was.... (if your still reading this, I'm sorry but thanks for bearing with me) its a completely different experience now. I'll wait for the the rest of the series to come out and hopefully grab them on sale or as a publishers pack, just to complete the collection of the series and find out how it ends, but I'm finding my backlog of other incredible adventures to take, much more appealing than what this series now has on offer. some will still love this obviously, and it's not had honestly, I actually re-bought this last book, not just to be an completionis, but because its still a good story, but this.... this is an ending in and of itself, that anybody who listened to the series is coming to the same unfortunate truth* and that is, it's definitely changed,and not what first drew me to it. Honestly, I truly enjoyed the wild ride, but it's just a memory now.... I'd like to get dropped off now.... I have a different adventure and starship ride that awaits!!

what a good story one of the best. over the top! .

just when you think it couldn't get any better he knocks it out of the park . the battle is unbelievably good. asking for another please !.

I'll never give a high performance to the current reader. I first listened on YouTube this series is why I subscribe to audibles when I did. The reader was brilliant he really brought you in. This guy isn't nearly as good. But the story was great as expected from Vaughn Heppner if your here you already know.

Another chapter in the great series

some live, some die, but as always an entertaining listen that will keep you wanting the next installment.

As disappointing as the last season of game of thrones

Every book, I mean every book in this series left me wanting for more except this one. This one felt like it wasn’t even the same author. Bland, boring, not even interesting. I felt like it was the last season of game of thrones wrapped up in this book. I don’t think this is the last book in the series - but i may be done based on how much I disliked the storyline. I loved this series until this forced book. I really like the narrator, and don’t understand why people are complaining. Narration was awesome.