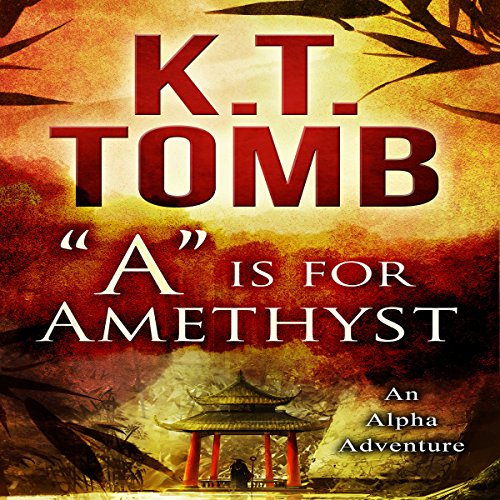 "A" is for Amethyst

Was a rare amethyst mine illegally seized from the Japanese ancestors of a well-known Atlanta family, just after World War II?

Four months ago, anthropologist professor Travis Monahan got shot while on an investigation of the mysterious floating city at Baikal. Suffering from PTSD, he's been holed up in their Atlanta office with his Jack Russell terrier and his brooding thoughts.

One of the partners, Savannah Summers, convinces him to take this case. Their new client, Miya Richards, hires them to search for the purported mine and its missing property deed, which she claims were seized from her grandmother's family.

While uncovering clues in the old quarter of Tochigi, Japan, the intrepid duo runs into a man who reveals that his uncle once tried to investigate and was never seen again. He does, however, tip them off to the Himiko Corporation.

Travis and Savannah go to Himiko, pretending to be research geologists. The head honcho immediately clams up and on their way out, a Yakuza biker gang pursues them. As action and clues lead the adventurers into the mountains, relentless descendants of the evil, rich Kinagawas and their ilk thwart them at every turn.

Their lives are at stake and Travis realizes this case is not as straightforward as it first seemed.

What listeners say about "A" is for Amethyst

A thriller with great action and adventure

What did you like most about "A" is for Amethyst?

I liked how the author has a team of investigators rather than just one lone gunman who just happens to be good at everything. I also liked how the investigators have lives outside their work and subsequently have their own set of problems and quirks. It was good to get to know them and see their faults, foibles, fears and of course their investigative skills.

What other book might you compare "A" is for Amethyst to, and why?

I was reminded of David Leadbetter's Matt Drake books as they also use a team of skilled people rather than just one person. Maybe also Alex Lukeman's work and maybe also Matthew Reilly's style of writing with his Jack West books.

Have you listened to any of Kerrie Seymour’s other performances? How does this one compare?

Kerrie Seymour was a great narrator. It's the first time listening to this narrator but I will look out for other books as well as checking out the series as it was very easy listening and very enjoyable.

Yes. I really enjoyed it and was drawn into the story.

"A" IS FOR AMETHYST by K.T. Tomb is the first book in the Alpha Adventures series. Not really knowing what to expect with this book, I was pleasantly surprised by how good it was! The story is quick-paced with a few plot twists and lots of action.

The story centers around Travis Monahan who is an anthropologist professor who was shot while investigating a location for the adventure agency Alpha Adventures. Travis is 4 months into a drunken stupor when one of the partners, Savannah Summers, decides to take him on another adventure instead of checking him into rehab. Alpha Adventures is hired by a prominent Atlanta woman to search for a long-lost rare amethyst mine in Japan that was purportedly stolen from her grandmother’s family at the end of WWII. The rest of the story is watching Travis transform into a functioning adult (rather than merely a drunk), embrace the investigation, and help solve the mystery of the missing mine.

Kerrie Seymour's narration was really good. She brought the characters to life, completely drawing me into the story. She uses a variety of voices, giving all characters their own unique voice, and seamlessly switches between genders and characters with ease. I'm really looking forward to listening to the next adventure written by KT Tomb and narrated by Kerrie Seymour!

Theft of an Inheritance

"A" is for Amethyst starts with anthropologist professor Travis Monahan suffering from PTSD after being shot four months ago while investigating the mysterious floating city at Baikal. Travis is basically a drunk trying to deal with the trauma of being shot with his Jack Russell terrier.

His partner Savannah Summer persuaded him in taking a case of a purported mine and a missing deed for their new client Miya Richards. They traveled to Japan to following the clues leading to Himiko Corporation. After their brief meeting with Himiko Corporation and getting no information, they are chased by the Japanese Yakuza.

"A" is for Amethyst is a short story full of suspense and twists and turns. This story even gives a brief factual information about the deep Russian Amethyst and what makes this particular amethyst so special. I also love the relationship between Travis and Savannah. Travis is always trying to get "one" over Savannah because she is smarter than he is.

I just love the way the story surprises me toward the ending. Yes, readers/listeners won't see that twist coming at them.

The narrator Kerrie Seymour provides a wonderful narration for the characters in the story. She provides the right voices when the story get a bit humorous between Travis and Savannah and even during their confrontations with Himiko, Yakuza, and Kinagawas descendants.

I was given this audiobook from the author/narrator/publisher via Audiobook Blast in exchange of an honest review. I was not compensated or influence in writing this review.

Where does "A" is for Amethyst rank among all the audiobooks you’ve listened to so far?

I liked the characters

I have seen her on stage. She is a fabulous actress but it is hard to compare the two. I loved the pace of her narration. She changed her voice enough to let me know of a character change but not so much that as to make it cheesey.

I was completely engaged throuhout.

This was my first audio book but it won't be my last.

An adventure around the world

Yes I like this book. It was fun to listen to. The author takes a anthropologist professor Travis Monahan who has started to become an alcoholic form PTSD and turns him into a hero.

There were several things going on that I thought were great. Without giving away the book. I thought the monkeys were a brilliant idea from the author. They were funny to hear the characters deal with them and how the monkeys helped the plot move along. I was taken totally by surprise by the client Miya Richards. The author completely shocked me with her role in the book.

No this is the 1st book I've listened to by Kerrie. She did a great job with the characters. She helped keep the suspense alive and the listener on edge.

When I thought Travis was going to be killed when he busted the women out for fraud in the end.