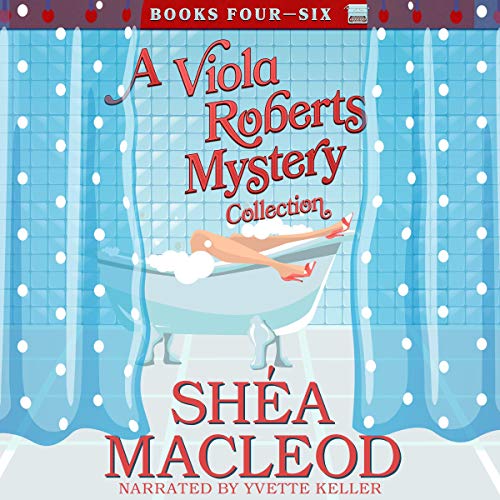 The Body in the Bathtub

Bunco night seems like a safe bet until someone finds a dead body in the bathtub. With her friends in shock and topping the local detective’s suspect list, Viola Roberts decides it’s time once again to take matters into her own hands.

With her usual snark and disregard for the rules, Viola investigates everything from a cupcake eating contest to the sordid affairs of the deceased’s husband. All while fending off her mother’s matchmaking attempts. She’s pretty sure she knows whodunit, but with her bunco ladies being targeted by a killer, Viola may have to decide between being right, or ending up dead.

The Venom in the Valentine

Viola Roberts is down in the dumps after discovering her boyfriend, Lucas, is snowed in back east. Her best friend, Cheryl, agrees to substitute a girl’s weekend for the romantic Valentine’s Day he had planned. Massages and mani-pedis for the win!

That is, until the hotel guests start receiving venomous Valentines, and one of them ends up dead. In a remote resort on the wild Oregon coast, it’s up to Viola to get to the bottom of things before any more guests fall to the killer’s poison pen.

The Remains in the Rectory

While touring the Cotswolds of England, Viola Roberts and her boyfriend, Lucas Salvatore, get stranded by a downpour of epic proportions. The quaint village of Chipping Poggs has only one inn, and just their luck, it’s a haunted mansion. Viola tries to make the best of her rainy vacation by “ghost hunting” and poking her nose where it doesn’t belong. Until she pokes it right into the middle of a murder.

With the village cut off by flooding from the violent storm, Viola naturally starts sleuthing. But when a second guest is found dead, and then a third body shows up, Viola’s own ghosts might be telling her it’s time to turn in her gumshoes.