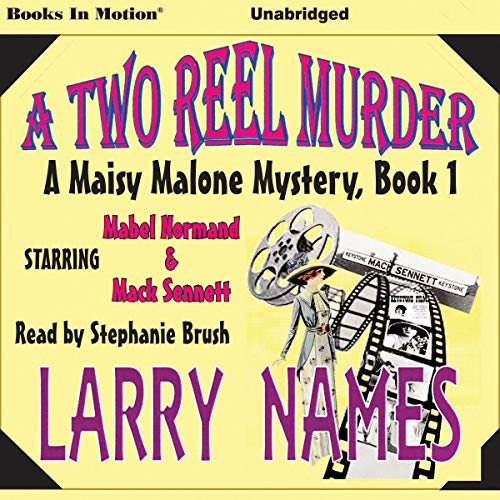 Maisy Malone went to Hollywood to become a star in motion pictures. Instead she became a sleuth, not by choice but by chance when she stumbled into a murder.

Los Angeles Police Detective Ed Browning intended to write off the death of actor Leslie Clover as an accident until Maisy said she could prove the man was murdered. To top that off, she bet him she could solve the murder before he could. Browning took the bet and the contest was on to catch a killer. Browning only had a bunch of inexperienced, clumsy, bungling cops to help him, while Maisy had the aid of silent screen actress and comedy queen Mabel Normand. The detective and the actress went to the wire nose-to-nose in their race to solve the crime and needed a photo finish to determine the winner.

Rated PG - “I very much liked the historical flavor that was brought to the story, both the period and the place were well drawn. Of course, that is what we expect from a Larry Names book. I was impressed with the level of detection that Maisy brings to the story. Most current mysteries are about the characters, the setting, and the action. What gets left out of that equation is unraveling clues. I can show you a dozen very successful books where the detective goes from place to place collecting clues only to have the villain reveal himself unexpectedly in the last chapter. Not so with Maisy Malone in A Two Reel Murder.” (Tom Colgan, Executive Editor, Penguin Putnam Publishing Group)