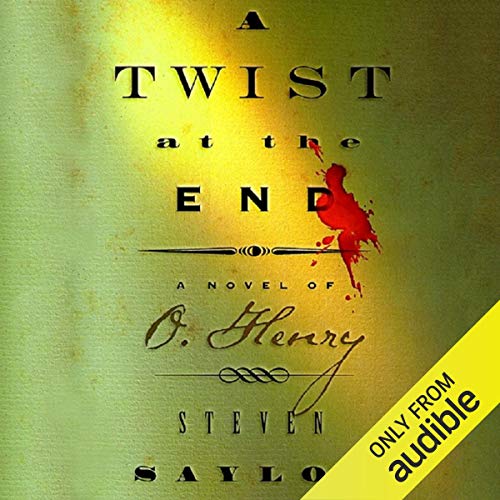 A Twist at the End

A Twist at the End

Best known for his acclaimed mystery fiction set in ancient Rome, in A Twist at the End Steven Saylor delivers a stunning historical novel about America's first recorded serial murders - the Austin, Texas, servant girl murders of 1885 - artfully blending real characters and true crime into an engrossing work of fiction.

The city of Austin, Texas, "is fearfully dull", wrote young Will Porter to a friend in the spring of 1885, "except for the frequent raids of the Servant Girl Annihilators, who make things lively in the dead of night." Years later Will Porter would become the most famous writer in America - O. Henry, the toast of New York. The long-ago Austin servant girl murders would remain unsolved. But behind the O. Henry pen name, Will Porter was a man with secrets. The appearance of a merciless blackmailer and a mysterious stranger draw Porter back into the past and back to Texas, to confront the twisted solution to those murders - and the secrets of his own soul. When he was a young man in Austin in that spring of 1885, Porter fell in love. Her name was Eula Phillips. She was beautiful. She was married to someone else. And she was doomed to be a victim of the Servant Girl Annihilators.

The first victims were young black women who worked in the households of Austin's most prominent citizens. The crimes were unspeakable, as the killer or killers used an ax and - in the newspaper parlance of the day - "outraged" the victims even as they were dying or already dead. The authorities were baffled. The murders continued month after month,until suddenly, shockingly, on a bloody Christmas Eve, the pattern changed - and the trial that resulted would uncover an explosive scandal of sex and power that would tear the city of Austin apart. The scene of these crimes was a capital city in uneasy transition.

"A riveting historical mystery.... It's all fascinating and provocative." (New York Times Book Review)
"One of the mystery genre's most inventive writers has turned his considerable talents - and his considerable ambition - to Austin, Texas, in 1885.... The result is a worthwhile, engrossing, deftly written novel.... Throughout, Saylor brings to bear his remarkable ability to evoke a vanished time." (Sunday Oregonian)
"Saylor, a veteran of the historical novel, navigates these rapids with confident skill...Better still, in the manner of O. Henry himself, he saves a cunning twist for the end." (Washington Post Book World)

Given Mr Saylor’s undoubted talents as an historical storyteller I was a little disappointed to find this tale almost completely lacking in pace and narrative drive. A bold move to call the novel A Twist at the End when it signally lacked one of it’s own.
The narration on the other hand was first class.