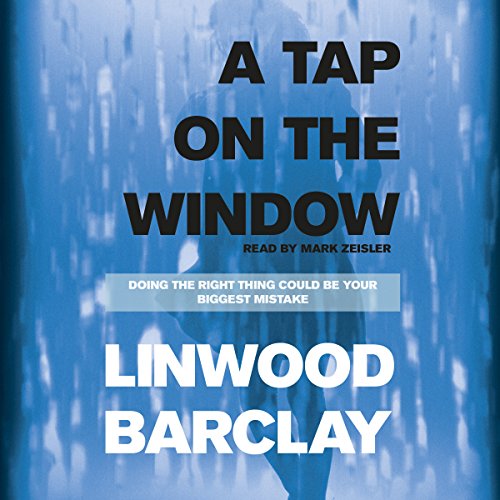 A Tap on the Window

By: Linwood Barclay
Narrated by: Mark Zeisler
Try for £0.00

When Cal Weaver stops at a red light on a rainy night while driving home, he ignores the bedraggled-looking teenaged girl trying to hitch a lift. Even when she starts tapping on his window. But when she says, 'hey, aren't you Scott's dad?' and he realizes she's one of his son's classmates, he can't really ignore her. OK, so giving a ride to a teenage girl might not be the smartest move, but how much harm could it do?

Over the next 24 hours Cal is about to find out. When the girl, Claire, asks to stop at a restroom on the way home, he's happy to oblige. But the girl who gets back in the car seems strangely nervous, and it's only when they get nearer their destination that Cal realizes she no longer has the nasty cut that he noticed on Claire's hand. After he's finally let her out of the car he remains puzzled and intrigued. But it's only the next morning that he starts to really worry.

That's when the police cruiser turns up at his door and asks him if he gave a lift to a girl the previous night. A girl who has now been found brutally murdered. If Cal is going to clear his name he's going to figure out what Claire was really up to and what part he played in her curious deception. But doing so will involve him in some of the small town of Griffon's most carefully kept secrets - and a conspiracy as bizarre as it is deadly.

What listeners say about A Tap on the Window

Slow to get going

Linwood Barclay has written some gripping thrillers but this isn't one of them. It takes nearly 9 hours of listening padded out by inconsequential details for the momentum to get going. It's a thin story that depends on some stupid decisions by the main character mixed with the fallout from his son's death a couple months earlier. The book did get better for the last few hours as the various strands of the narrative, that seemed unconnected, came together.
The narrator is very good.

I've listened to many audio books and this one has the longest silent pauses between chapters that I've ever come across. I kept thinking my player had turned off.

Would you try another book written by Linwood Barclay or narrated by Mark Zeisler?

I was looking for something easy when I picked this as I'd just finished a fairly heavy book. Having read a few Linwood Barclay's previous books I thought this would be a safe choice. How wrong I was. A terrible and utterly impluasible storyline, cringeworthy dialogue all delivered in a gruff and aggresive tone throughout. Unless you fancy having someone shout a rubbish story at you for 12 hours, I would certainly not recommend this audiobook.

I will be looking for another crime or thriller audiobook, but will avoid Linwood Barclay like the plague.

What aspect of Mark Zeisler’s performance might you have changed?

His performance was fine, I think the source material was the problem.

Anger and how bad it was, dissapointment that I'd wasted a credit.

This Is my second Linwood Barclay novel. After listening to "too close to home" which was brilliant I've decided to listen to every one of this author's books.

Again Linwood delivers a brilliant 'who done it !' murder mystery.

The narrator was new to me and although in my opinion he is not as good as Christopher Lane , Mark Zeisler made a great performance.

I was gripped to the very end. can't wait to read more from Linwood Barclay

Great all round story

gripping. I enjoyed this book - a good story well narrated. would recommend it. Glad to have discovered this author.

A story about ups and downs, and doing the right thing, without consequence. Loved it!

Better than I thought it would be. Twists that you didn't see coming. Last time I pick up a hitchhiker...

Easy to visualise the characters and place, story well structured, kept you guessing until the conclusion.

Not the best Linwood Barclay novel

The story starts off quite well but really drags towards the middle, the themes felt old.....bad cops intimidating innocent citizens etc. I persevered and though it felt a bit far fetched at times I enjoyed the book overall.

While not his best book it had enough twists and turns to keep me engaged while driving and doing housework.

This was my 5th audiobook by this author. I would recommend 'Trust Your Eyes' , ''No Time for Goodbye' and 'Never Look Away' before 'A Tap on the Window'.