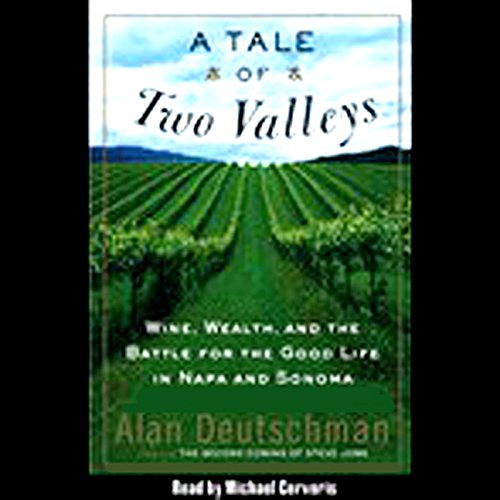 A Tale of Two Valleys

By: Alan Deutschman
Narrated by: Michael Cerveris
Try for £0.00

When acclaimed journalist Alan Deutschman came to the California wine country as the lucky houseguest of very rich friends, he was surprised to discover a raging controversy. A civil war was being fought between the Napa Valley, which epitomized elitism, prestige and wealthy excess, and the neighboring Sonoma Valley, a rag-tag bohemian enclave so stubbornly backward that rambunctious chickens wandered freely through town. But the antics really began when new-money invaders began pushing out Sonoma's poets and painters to make way for luxury resorts and trophy houses that seemed a parody of opulence. A Tale of Two Valleys captures these stranger-than-fiction locales with the wit of a Tom Wolfe novel and uncorks the hilarious absurdities of life among the wine world's glitterati.

Deutschman found that on the weekends the wine country was like a bunch of gracious hosts smiling upon their guests, but during the week the families feuded with each other and their neighbors like the Hatfields and McCoys. Napa was a comically exclusive club where the super-rich fought desperately to get in. Sonoma's colorful free spirits and iconoclasts were wary of their bohemia becoming the next playground for the rapacious elite. So, led by a former taxicab driver and wine-grape picker, a cheese merchant and an artist who lived in a barn surrounded by wild peacocks, they formed a populist revolt to seize power and repel the rich invaders.

Deutschman's cast of characters brims with eccentrics, egomaniacs and a mysterious man in black who crashed the elegant Napa Valley Wine Auction before proceeding to pay a half-million dollars for a single bottle. What develops is nothing less than a battle for the good life, a clash between old and new, the struggle for the soul of one of America's last bits of paradise.

A Tale of Two Valleys is also available in hardcover from Broadway Books.

"Rarely has such an exclusive world and its inhabitants been made so accessible." ( Publishers Weekly)

What listeners say about A Tale of Two Valleys

See the Film: read the Book!

The literary version of 'Mondovino'. Except that Monsieur Mondavi is a bit of a hero in the author's eyes, whereas in Mondovino he is definitely a villain! However, Mondovino is all about the gritty local French winemaker fighting off globalisation in the form of the Mondavi family and in 'Two Valleys' it's a bit more domestic, with the Somona residents taking the part of the laid-back locals, if not yokels, competing with the super-rich neighbours in the next door valley, Napa. It bears comparison with the competition existing between adjacent Welsh valleys many years back, but then there was always rugby to act as a leveller. Here the competition is based on conspicuous consumption. But a fascinating listen all the same with many amusing character portraits, and if the reader slowed the pace just a bit, al la the laconic Bryson, it would have been even better.

PS: For those outside the U.S. of A, the Compass Guide to the 'Wine Country' (California's Napa and Sonoma), fleshing out the text, makes a great bonus.

Seems to have been written for the tax write-off

Getting through this one was painful. The author wastes pages on ecstatic inventories of the excesses of the Napa "plutocrats" and "decamillionaries." Then he wastes more pages on long not-quite-believable quotes from all the "bohemians" fighting urban sprawl in Sonoma (does anyone really talk in such long, fully-formed monologues?). And in the end, I'm not sure what you end up with. There were no really meaningful insights into that classic struggle to control growth without impeding progress.

I have long been fascinated by the part of California depicted in this book, but there was something mechanical and obvious about the writing of this book itself. Maybe it would have been better if the writer had simply picked one valley, rather than try for the Dickens parallel. A book that focuses on a small part of California needs to be quite special to justify the reader's investing time in that area of micro-knowlege. The author's book on Steve Jobs beats this by a long ways.

Enjoyed learning about the local history...

...light and easy read (listen). I think it adequately describes the difference between Napa and Sonoma.

who chose the reader?

the narrator didn't know how to pronounce the place names -- it was awful to listen to.
unfortunate as its an interesting story.

A waste of time

This book is insufferable. I read (listened to) The House of Mondavi and was expecting something of the same caliber. How wrong I was. This book is nothing more than inane and simplistic ramblings against anyone with a Porsche, BMW, or Mercedes. How this guy every got published is a mystery.