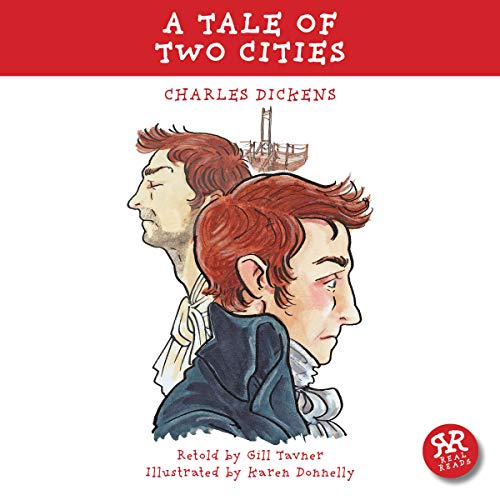 A Tale of Two Cities

By: Charles Dickens
Narrated by: Graham Bill
Try for £0.00

"It is a far, far better thing that I do than I have ever done."

Sydney Carton is a lawyer who has wasted his abilities and his life. Now he has to make a difficult choice about what is really important to him, which could be a matter of life or death.

The French Revolution is running its violent course; lives are ruined as a new France is created. How did the gentle Doctor Manette and his daughter, Lucie, become caught up in France’s struggles? What is the real identity of the handsome Charles Darnay, who wins Lucie’s hand in marriage? And why does the shadow of La Bastille Prison hang over them all?

"Miniature masterpieces." (BBC R4 Open Book)
"Not every child will get Dickens, but a chance to get to know him should be the birthright of every Briton. Break them in gently. Let schools show Lionel Bart’s incandescent Oliver! Let younger ones learn the remarkable stories of Pip and Tiny Tim through Gill Tavner’s excellent condensed Dickens Real Reads and prove that the vast human spirit under that slab in Westminster Abbey is not dead, only sleeping." ( The Telegraph)
"The Real Reads series is definitely held in high regard here at Scholastic--titles that are that elusive mix of teacher- and student-friendly. I only wish it existed when I was at school so that I knew what happened in the last two-thirds of Jane Eyre!" (Lauren Nightingale, Scholastic Education)

What listeners say about A Tale of Two Cities

Required reading at my high School, I forgot!

Develop the characters and story.

Would you ever listen to anything by Charles Dickens again?

I don't think so.

Would you be willing to try another one of Graham Bill’s performances?

Yes, I enjoyed the vocals

I would not recommend this to friend or foe!