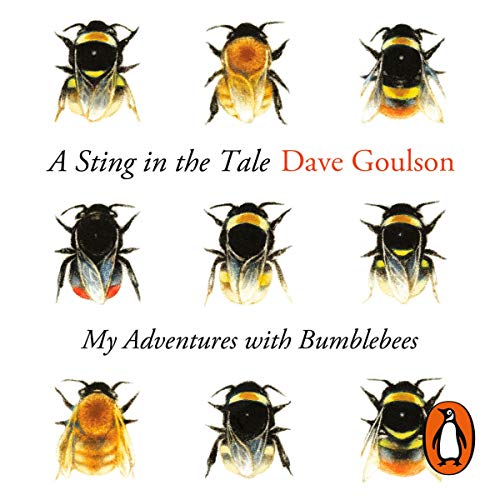 A Sting in the Tale

Random House presents the audiobook edition of A Sting in the Tale, written and read by Dave Goulson.

Short-listed for the 2013 Samuel Johnson Prize.

Dave Goulson has always been obsessed with wildlife, from his childhood menagerie of exotic pets and dabbling in experimental taxidermy to his groundbreaking research into the mysterious ways of the bumblebee and his mission to protect our rarest bees.

Once commonly found in the marshes of Kent, the short-haired bumblebee is now extinct in the UK but still exists in the wilds of New Zealand, descended from a few queen bees shipped over in the 19th century. A Sting in the Tale tells the story of Goulson’s passionate drive to reintroduce it to its native land and contains groundbreaking research into these curious creatures, history’s relationship with the bumblebee, the disastrous effects intensive farming has had on our bee populations and the potential dangers if we are to continue down this path.

What listeners say about A Sting in the Tale

This book is for all who have an interest in Bumblebees. It will appeal to experts, serious students and beginners. There is plenty of meat to get your teeth into without overburdening those whose interests are at an early stage. The author has a dry sense of humour which shines out through the book as does his enthusiam an knowledge of the subject.
My only criticism, and it is a very minor one, is that the author is a ad fast in his reading of the book. However, saying that, I am sure that everyone who reads or listens to the book will know a lot more about Bumblebees after completing the book and I guarantee you will be more passionate about their conservation. The audio book inspired me to buy a hard copy of the book as a reference aid.

I got this Audible title as soon as it appeared and enjoyed it immensely. The paper book is great, but having the author read it to you is so much better. Dave Goulson tells a lively, amusing and insightful story of a research ecologist, from childhood fascination with nature to professor of biology and his own research group. He weaves his story around research on bumble bees, with some amazing snippets about their behaviour and ecology. He tells of the people he has met, students he has supervised and the ups and downs, twists and turns of scientific research. The language is very accessible, and its a story, not a text book, so don't be put off if you're not a scientist. You will have a good laugh and learn some amazing stuff about bees! However, if you are interested in science, especially considering a scientific career, you really should let Dave Goulson read his book to you and be inspired by bees.

Well read with great stories an humour given the content is very important now and in the future. interesting, informative, funny and serious. I cant wait for the next book to be on audible.

People with toe fetishes my find this book squemish.

A beautifully idiosyncratic book with a great mix of amusing anecdotes and biological descriptions. Dave has the capacity to inspire

How has he done this? The book is packed with information about bumblebees, insects and ecology but is tremendously entertaining throughout. Some parts I actually found hilarious!

I love his honesty too, especially regarding his childhood mishaps with nature pursuits.

He's such an interesting character that the biographic parts mix perfectly with the factual content to make for a wonderful read. Highly recommended

Enjoyable, although more scientific and factual than I expected. More anecdotes works be welcome!

Fascinating and informative while being easily accessible to a non scientific person like me. Recommended.