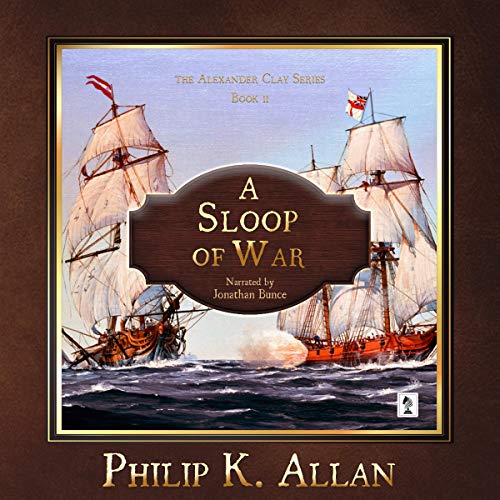 A Sloop of War

By: Philip K. Allan
Narrated by: Jonathan Bunce
Try for £0.00

A Sloop of War, the second novel in the Alexander Clay series, is set on the island of Barbados, where the temperature of the politics, prejudices, and amorous ambitions are matched only by the sweltering heat of the climate.

After limping into the harbour in the crippled frigate Agrius, accompanied by his French prize, the equally battered Courageuse, Clay meets with Admiral Caldwell, the commander in chief of the island. The admiral is impressed enough by Clay's engagement with the French man-of-war to give him his own command, the sloop of war Rush.

The Rush is sent to blockade the French island of St Lucia and to support a landing by British troops to attempt to take the island from the French garrison. The crew and officers of the Rush are repeatedly threatened along the way by a singular Spanish ship, in a contest that can only end in destruction or capture. And from the ranks comes an accusation of murder levelled against Clay by the nephew of his former captain.

Philip K. Allan has all the ingredients for a gripping tale of danger, heroism, greed, and sea battles, in a story that is well researched and full of excitement from beginning to end.

What listeners say about A Sloop of War

I think the author is really hitting his mark. Somewhat derivative of O'Brian and Forester but with his own twists and characters. I'm so glad to see something new and fresh in the genra.

A great age of sail story

Great stuff, very readable and fun. characters are quite well sketched and relatable to boot.