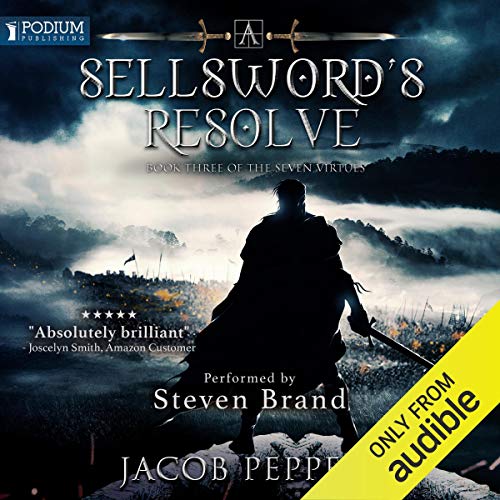 By: Jacob Peppers
Narrated by: Steven Brand
Try for £0.00

Aaron and his companions prevented the assassination of a queen, but in doing so, they angered an ancient evil. Angered it, wounded it, but did not kill it, for such evil never truly dies.

An army greater than any the world has ever known marches bringing steel and death with it, and somewhere, a 1,000-year-old evil lurks in the darkness, plotting and bending its will toward revenge.

Aaron and his companions have gathered allies to help them in the coming battle, and each day, his bond with the Virtue of Compassion grows stronger, gifting him greater and greater power.

But if life on the street taught Aaron anything, it’s that no one is better able to stab you in the back as those standing behind you. And as his power with the legendary creature grows, so, too, does an uncontrollable rage that threatens to consume him.

His enemies are many, his friends few, but no matter what happens, they will all learn the truth of a sellsword’s strength.

He will show them a sellsword’s resolve.

What listeners say about A Sellsword's Resolve

Every Man Can Make a Difference

As I’m still downloading the books, there must be something I like about the series, just not the narrator.

The war has arrived; more virtues are revealing themselves and Boyce Kevlane shows just how depraved a god he is. I think my favourite character so far is May.

Brilliant story i really enjoyed listening,
Looking forward to the next book, but cant find any infomation on the release date

this is my favorite series hands down. keeps getting better . I cant wait for the next story.

I have read the book and decided to get the audio version as well. It did not let down yet again! I loved the build up to the battle and just kept listening waiting for the Ghosts to fight. Steven Brand does a great job and does great with changing his voice for the characters. Well done!

Long Story Short - Everyone is Stupid

This is one of the more infuriating books to go through. Be warned, if you do not have the patience for contrived drama, characters being stupid for the sake of said drama, and chapter after chapter of the characters giving the weakest excuses for their stupidity, then do not buy this book.

One of the best fantasy books I've made my way through in awhile. Exciting, addictive and can't wait for the next one

The stupidity of the main characters is beyond frustrating. Against my better judgment I made it through to the end of book 3 (A pathological need to find out how things finally ended up.) But I’m done with this series. The frustration finally won out.

This is book 3 of the series, and I listened to it on audible, so you know he's doing something right. Wrath makes "their" presence known as Silent and co. find themselves in more shit than even they can handle. Book 4 looks like it will be a nail biter! I'm loving who has the virtue of strength now as well :)

4 star story cuz it dragged and had me thirsty .

This book was written at a good pace. Pissed me off for being slow at a point. I guess that's the authors point. Intrigue. Made me read ahead on my kindle, and still listen to the audible. Over all. Awesome. I am impatient when it comes to climax. However I think the author did it damn near perfect. best book in the series so for. Oh yeah I'm an action fan not, drama. lol

When reviewing my unfinished book series I happened on Book 1 of this series and noted I gave it some high marks and comments. Based on that alone, I decided to purchase the 3rd book without first taking the time to look at my review of the 2nd book, which I later found that I had rated it poorly. Since I had already purchased the 3rd book, I decided to give it another chance to turn itself around.

Regrettably, it was a tortured experience listening to many minutes of banal, inconsequential sections that only served to needlessly lengthen to story. Added to that, the author wrote many dialogs where the narrator would utter a few words, then stop out of fear or embarrassment or dumbfoundedness or for no known reason but that had the profound effect of making for an irritating listening experience.

Shallow characters, plot that drags on, and decisions that make no sense. Overall I finished this book just to finish it, but amongst the fantasy books I've read and listened too, this series is near the bottom. Main character is essentially a mad child that makes terrible decisions but everyone seems to follow his lead for no reason what so ever.