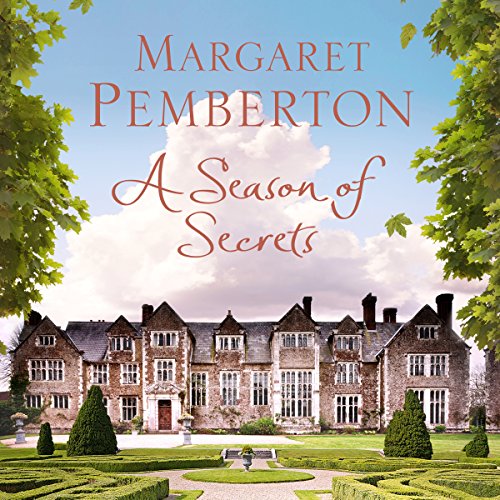 A Season of Secrets

By: Margaret Pemberton
Narrated by: Kristin Atherton
Try for £0.00

Sweeping from the Great War, through the Jazz Age to the 1940s, this unforgettable tale follows the entwined lives of the Fentons, an aristocratic family from Yorkshire.

Thea, the eldest daughter of Viscount Gilbert Fenton, flouts the unwritten rules of her class by embarking on a love affair with Hal, the fiercely socialist son of one of her father's tenant farmers.

Carrie, her close childhood friend and granddaughter of the Viscount's nanny, has always been expected to marry Hal - but when she goes into service she finds herself longing for the one person she can never hope to marry.

Olivia, the middle Fenton sister, follows a more conventional path, forging friendships with the British royal family and attending a finishing school in Germany. Her relationship with Count von der Schulenburg does not raise eyebrows, but as the mid-1930s approach, she finds herself in a country experiencing rapid, radical and dangerous social change.

Violet, the youngest of the Fenton sisters, is also the most reckless. She dreams of becoming an actress in Hollywood, unaware her life will be filled with more drama than any part she will ever play.

And then there is Rozalind, their American cousin, who is secretly in love with a married US Senator. Her ambitions to become a photojournalist will also take her into the heart of Hitler's Germany.

Set against the rich canvas of the first half of the twentieth century, A Season of Secrets is an unforgettable tale of passion and betrayal, love and war from the ever popular Margaret Pemberton.

What listeners say about A Season of Secrets

I thought this would be a bland easy listen but I was very wrong. I really, really enjoyed this book and would recommend it to others. I also feel there is a second story and would be happy to read /hear what happened next.
The characters are rather Mitford esque although with a more acceptable political viewpoint. In all honestly I didn't care all that much about most of the characters however the ones I did kept my interest in the storyline and knitted it all together. The characters were well rounded, very individual and I was surprised by how much they evolved. The narrator did a good job in conveying each separate personality and her reading was pleasant to listen to.
My only criticism is that the pace was rather fast, the timespan past quickly and the focus jumps to quickly from character to character. This might have been made better as a series of books.

Fabulous story - brilliant narrator. Can't recommend enough. Rare to find a narrator with such a range of accents - all flawless. A pleasure to listen to

Full of suspence and drama a great book loved it. want to try other booms by Margaret Pemberton.

What can I say about this wonderful story- it was marvellous from the beginning to the end and the narrator Kristin Atherton , oh my goodness me - so many voices and different accents -. I felt that I was listening to a play. So many twists and turns and the different life styles of people who had plenty and those who had little. I was glad that the story ended so happily.

Wonderfully written and the narrator was perfect for the story. It made me cry at the end

I loved this book . Fantastic narration made it an absolute joy to listen to .I have just purchased her other book

A good storyline with characters that kept me interested throughout the book. Very well narrated. Highly recommended!

When I started this book I liked it immediately but it felt a little girlish for the first few chapters. Then it took off. It’s just a really enjoyable story. It’s a little slow paced in parts but it’s a book I didn’t want to end. I only listen to audible on my walks and some days with the weather it can be a bit of an endurance but I found myself going out in all kinds of conditions just to get lost in this book. The narrator here is absolutely outstanding. She has a lovely voice of her own but the range of accents and characters which she does is amazing. Hugely enjoyable, best audio book I’ve heard so far.

The different threads of this story bringing together three dimensional characters were beautifully interwoven and covered a large span of time in an economical way. It left me wanting to know more about them. i dud not want he story to end. The narration was superb and added to the enjoyment of listening to the story.