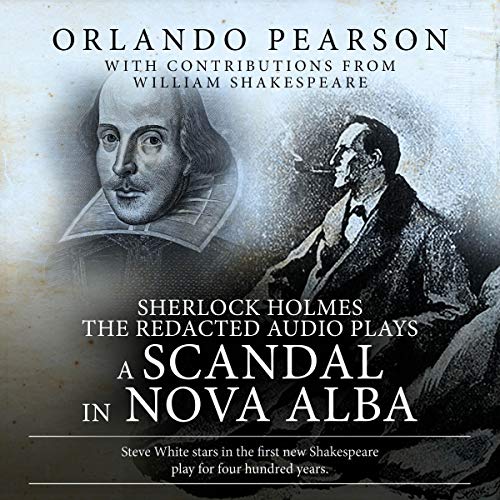 A Scandal in Nova Alba

By: Orlando Pearson
Narrated by: Steve White
Try for £0.00

The King of Nova Alba, in this new stage-play version of the story, approaches Sherlock Holmes to discover who killed the king’s predecessor.

Shakespeare wrote comedies, tragedies, and histories, but he never got around to writing a whodunit, and this mixture of the Bard and Baker Street fills the gap in his oeuvre. The King of Nova Alba approaches Sherlock Holmes. The current king’s predecessor on the Nova Alban throne, King Duncan, came to a violent end, and Holmes' petitioner is the prime suspect. He wants Sherlock Holmes to find the true killer. There is many a twist in a familiar tale, before Holmes reveals the utterly unexpected truth. Two years after Delos' publication of the story version of "A Scandal in Nova Alba", here it is at last as a stage-play.

Orlando Pearson, creator of the well-known Redacted Sherlock Holmes series, commutes into London during the day and communes with the spirits of Baker Street by night.

An international businessman, his interests include classical music, history, literature, current affairs, sport, and economics. All these themes find their way into his stories which are being translated into German and Italian.

Mr. Pearson is married with two children and lives near Wisteria Lodge.

What listeners say about A Scandal in Nova Alba

Don't quite know what to say it's not really long enough to form any sort of an opinion.
I received this audiobook free, in exchange for an honest and unbiased review.
Tracey Allan

good short listen. would have made for an excellent longer book. wonderful narration & timing.