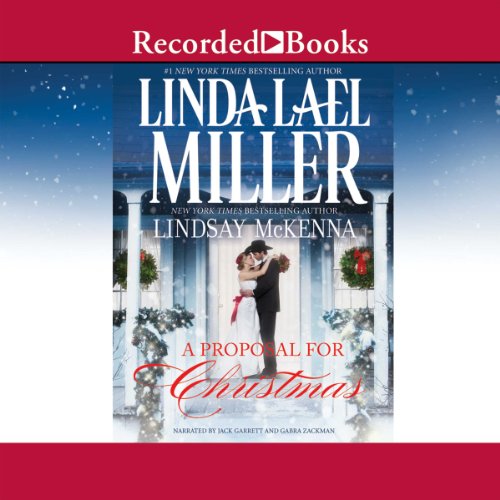 A Proposal for Christmas

State Secrets: Secret Service agent David Goddard never expected to spend his Christmas surveilling the president's cousin. But after weeks of studying her, he finds that Holly Llewellyn's life continues to remain a mystery. Tangled in the controversy swirling around them, David wonders, is it her secrets that fascinate him…or Holly herself?

The Five Days of Christmas: Morgan Trayhern's toughest mercenary, Colt Hamlin, is looking to lie low this Christmas, but he may just have a change of heart when his matchmaking boss puts him in the path of Montana's prettiest widow.

What listeners say about A Proposal for Christmas

In Linda Lael Miller's story, the narrator was male & it was mainly written from a female perspective. It took a while to get used to it. The narrator in Lindsey McKenna's story needs to get better at doing men's' voices. Her voice for Colt (who is suppose to have a deep gravelly voice) sounded more like she had a frog with laryngitis in her throat. It was difficult to ignore and just her the words. Both were good stories. I would listen to both narrators again but the choice of the first & the abilities of the second might give me pause as to what type of material I was listening to read by them.

There seem to be plenty of people who do like it, but I didn't care for this one.

What was most disappointing about Linda Lael Miller and Lindsay McKenna ’s story?

Holly was so wishywashy, I just wanted to shake her. To allow anyone to treat her like that repeatedly and keep going back for more shows a complete lack of selfesteem. I had no real liking for either Holly or David.

The narration was fine. I couldn't get behind the story and just wanted it to end.

**State Secrets by Linda Lael Miller**
-4.5 stars-
I really enjoyed this book. While Christmas does play a role in this book, it is not the central focus. The book begins just before Thanksgiving and goes through the beginning of the following year, with the epilogue being many months or years later. The book has a HEA ending with no cliffhanger. Having read this book, I would be interested in reading another of Miller's works.

**The Five Days of Christmas by Lindsay McKenna**
-4 stars-
While it took me longer to get into this book than the first book in the anthology, I did very much enjoy it. Abby is a widowed school teacher and Colt is a mercenary struggling with PTSD. The two connect over the Trayhern's five days of Christmas celebration. I really liked how Abby was able to help Colt heal, even if not completely. The emotions in this book were moving and occasionally raw. Overall, a great HEA book with no cliffhanger.

What did you love best about A Proposal for Christmas?

Both of the stories were sweet, and I enjoyed the stories, but I would have liked the second one better if narrated by someone else.

Would you be willing to try another one of Jack Garrett and Gabra Zackman ’s performances?

I enjoyed the Jack Garrett performance, but I do not like Gabra Zackman's.

Not really, there are better books. I was disappointed that this is actually 2 different stories. Guess I need to pay attention to reviews before I purchase.

Not sure, but I am always in search for the next book.

Could you see A Proposal for Christmas being made into a movie or a TV series? Who should the stars be?